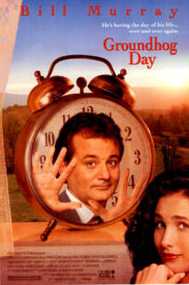 As I recall, the plot of Groundhog Day is that the hero, played in the film by Bill Murray, had to replay the day, over and over again, until he got it right. There is no such relief for this blog, however. It doesn't matter how right we get it, we are doomed forever to revisit the same stories.

One of these is that hardy perennial, Value Added Tax and its inescapable accompaniment, fraud. In that context, it really is quite amazing that there should ever be a story here. Never in the field of human taxation has any money gathering device been so open to criminal raids, so much so that any halfway intelligent crook would be mad to steal from a bank. Creaming money from government coffers is so much easier and profitable.

Yet, because it is an EU tax – devised by French bureaucrats – there is no easy way of getting rid of it. Ever heard that one before?

When we left it last time, in July, in a piece called "money down the drain", Britain had been seeking to change the rules to allow what was called a "reverse-charge" system of VAT on computer chips and mobile phones.

This was to fight the so-called "missing-trader fraud", where large quantities of high-value imported goods (free of VAT) are sold on with VAT To British traders, only for the trader to disappear with the proceeds. This, we are told, cost the UK exchequer £2bn-£3bn in 2005-2006 (although it could be a lot more).

The reverse-charge system means that the VAT is payable only by the final customer - making it closer to the old-fashioned purchase tax. And while this would have ended the missing trader fraud, it was blocked – you guessed it – by France.

Now, it seems - after six months more losses - France has been looking at its own accounts and, lo and behold, officials have found that the French system is also rather "leaky". They have lost anything between £200m and £1.3bn this year alone. And, now that French interests are directly affected, France is suddenly interested in a change of the rules.

However, Germany wants to introduce the system across the board, which the French think would open up new opportunities for fraud. So the French are planning to block any German moves to get this scheme adopted, calling in aid British help. In effect, they demanding a quid pro quo - a reward for supporting the British in getting a targeted reverse-charge scheme which the French now also need to stop their own fraud. With me so far?

Germany on the other hand, together with Austria – two countries which are losing mega billions on VAT fraud – are therefore now considering a retaliation. They are saying they will block the now Anglo-French scheme.

Meanwhile, Laszlo Kovacs, the EU tax commissioner, is warning of a "chaotic situation" if different countries apply different rules, and is demanding that member states work together more closely to fight cross-border crime. And, sometime soon, the finance ministers of the EU member states are going to meet to sort this out...

If only this was a film. At least then it would come to an end and we could all go home.