A clash of cultures 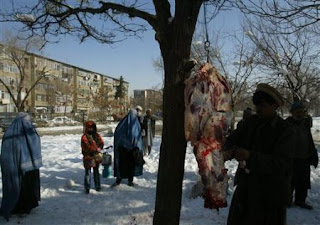 As an Afghan butcher in Kabul chops meat after slaughtering a cow in the open air - on the first day of Eid Al-Adha - watched by women in burkas, this one picture summarises the stark clash in the values of two civilisations.

In the West, we cover our meat and expose our women.

Here in Afghanistan, they see no harm in allowing fresh air to get to their meat (and have science on their side in so doing) but would be scandalised if women showed so much as an ankle in public.