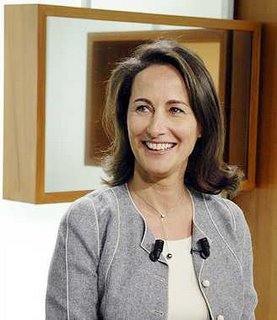 Nothing short of political genius there. No sooner does the first woman candidate for the French presidency (and a seriously glamorous one, at that) emerge from the phallocratic structures of the Socialist Party than she manages to mess things up.

Ségolène Royal’s problem is a well-known one. Being good at winning the nomination is not quite the same as being seen as a potential winner in the real contest. Above all, she badly needs some kind of international gravitas to appear to be ready for the leadership of France. After all those jokes about stupid and ignorant Americans, particularly President Bush, we cannot have a French presidential candidate who clearly has no idea where in the world anything is. Or can we?

Early this month she trotted off to the Middle East, anxious to show that she is aware of some of the most complicated problems in the world and that France is the country to deal with them particularly if Mme Royal becomes its president. She met various people, including the leaders of Hezbollah in Lebanon and that did not go down particularly well even in France. Hezbollah is after all a terrorist organization, dedicated to the destruction of Israel and not too anxious to ensure Lebanon’s survival either.

Worse was to come. During their conversation, Ali Ammar, a Hezbollah MP in Lebanon (presumably, one of those who no longer support the duly elected government of the country) held forth on various matters, assuring Mme Royal that Israeli occupation (that means the territory of Israel with whatever borders) was akin to the Nazi regime. He also said that American foreign policy was “unlimited madness”.

It is unclear whether the presidential hopeful understood what was being said because she agreed with his “analysis on the role of the United States”. The following day she had to retract that, much to the glee of her opponents, Nicolas Sarkozy and the right-wing politicians and media.

Not that Libération was any more friendly:

Why should Ségolène Royal go into this wasp's nest, in which professional diplomats are already treading on eggshells? Was it merely to prove that she could do it?

Well, why indeed? Her rather lame excuse that she had not understood what Ali Ammar was saying and thought that she was merely agreeing with him on the subject of American involvement in Iraq and the toppling of Saddam Hussein makes one wonder what her interpreter was doing all this time.

Mme Royal continued her Middle Eastern tour but came up with no very obvious solutions to the problems. But, at least, she went there, which she is not going to do with the United States.

Her planned trip has been called off, it would appear because Hillary Clinton, reflections of whose lustre our Ségolène badly needs, has refused to meet her. From Senator Clinton’s point of view, that is very understandable. She is a serious (if deeply dislikeable) politician with serious (if rather frightening) ambitions for the White House. She cannot afford to be seen giving support to a ditzhead.

There are serious problems about supporting the French Socialists, though they may see the Clintons as friends and allies. For one thing, the Democrats, with all their faults in economic thinking, are not socialists and do not support such lunacies as the 35 hour week and wide-spread state control. And even if some of them did, they would not hope to get away with it, come 2008.

Then there is the endemic anti-Americanism of the French Left (and the French Right, come to think of it), which is not confined to dislike of President Bush or the Republicans. In fact, on present record, it is questionable whether Mme Royal knows the difference between the two parties.

Above all, however, Senator Clinton cannot afford to be seen with presidential hopeful Royal after the Middle Eastern visit and that unfortunate conversation with Ali Ammar. So, for the moment, the American trip is off.

In the meantime, Nicolas Sarkozy, who is, supposedly pro-American, at least by French standards, has joined the "let's knock the euro" brigade. In his view, the euro is overvalued thus “making European labor expensive and the labor of the rest of the world cheap”. M Sarkozy ought to work out that there might be other reasons why labour in the eurozone and the rest of the EU is too expensive.

His solution: "an economic government for the eurozone". Run on French lines, perchance?