If they can have "Kremlinology", then the word "Euology" must be just as valid.

And, as did Kremlinologists of old who could work out who was "in" and who was out of favour by the relative positioning of the politburo on the roof of Lenin's tomb during the annual Mayday parades, from the periodic "family photographs" of the member state leaders at European Councils, we can attempt to assess the "state of the union".

From this latest one, taken prior to the meeting in Brussels over the last two days (14-15 December), two things of great interest emerge. Firstly, you can see from the picture (double-click to enlarge) that the group is highly dysfunctional. These are the heads of state and governments of the 25 EU member states (plus their hangers-on) and this is their showcase to the world. It will be used widely as a publicity shot to accompany the news items about the meeting.

Yet, as you can see (especially in the enlargement), they cannot even be bothered to pay attention to the camera. Within the main group, there are a number of sub-groups each holding their own conversations, oblivious to the purpose of the gathering. This applies especially to our great leader (circled in the main photo with a cutaway right), who is one of those looking away from the lens. 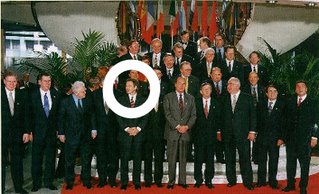 But even more fascinating is Blair's positioning relative to the centre. In the heady days of 1997 when a newly-elected premier was determined to be at "the heart of Europe", this was reflected in the family photos of the European Council, this one in November 1997 where he is in the front row only a few places from the centre (circled) and very much the centre of attention. 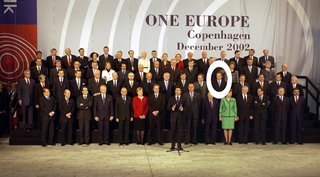 By 2002, however, when the enthusiasm has waned and the British are gearing with the US for the incasion of Iraq, we can see this in his new positioning (circled) in the family photograph. No longer at the centre (where you will always find Jacques Chirac), you will find him on the second row, unsmiling, and being ignored by those around him. How apt it was that the slogan was "one Europe" when it was anything but.

In December 2005, it looks like Blair is back in favour, but the photograph is illusory. The UK is holding the rotating EU presidency so he is at the centre, representing the office, not his own country. And, if he is also at the centre of attention, this is the council at which he gives away billions of pounds in extra contributions. 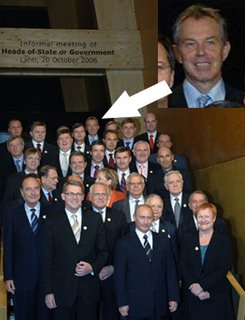 His true sentiment, however, is best represented by his positioning this October, at the Sibelius Hall bash, in Lahti, Finland. Blair – with his cheesy grin - could not get much further away from the camera (and the centre) if he tried. Thus, 1997 to 2006 becomes a journey of ten years that tells its own tale.

But there are two other things to emerge from the Council. The first is the vacuity of the communiqué. Nothing new there, but this example is priceless:

The European Council expresses its concern about the negative impact of Iranian policies on stability and security in the Middle East. The European Council underlines that Iran needs to play a responsible role in the region. In particular, the European Council deplores Iran's failure to take the steps required by the IAEA Board of Governors and the UN Security Council, and agrees that this could only have negative consequences for relations between the EU and Iran. 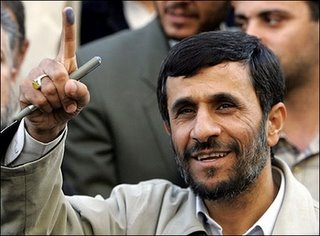 Now that really will get Armoured Dinner-jacket quaking in his sandals.

For the second thing - we see very little publicity. Even China Daily is struggling and most of the western media simply ignore the event or give it token coverage. Only the Germans are vaguely interested, but that is because it is their girl next.

So does the once great vision of a united Europe slide into unreality. This lot can't even unite long enough for someone to take a proper photograph of them.