What will we have gained? 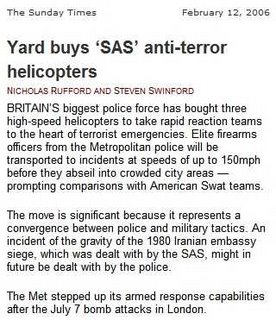 Not only the content but the date also of this article in the Sunday Times is relevant. Written February last, it confirms the view that security forces cannot deal effectively with terrorism without the use of modern, properly equipped helicopters.

Thus does this newspaper record that London's Metropolitan Police has bought three high-speed helicopters (Eurocopter EC 145s) to take rapid reaction teams to the heart of terrorist emergencies - just the sort of thing that would be ideal to deal with the hit and run mortar teams that are causing such havoc in Basra.

To provide 24-hour coverage of the city and environs in an insurgency situation, however, you would probably need about 12 helicopters, the number shown below. That represents less than a third of the fleet operated by the British police and twice the number of tactical helicopters operated by the Army in the whole of southern Iraq. It also represents just over half the price of one Eurofighter or Apache attack helicopter, either of which cost around £60 million each - and one tenth the cost of the failed Phoenix UAV programme.

The point is not lost on American Thinker, with James Lewis picking up the report that a Catholic bishop has entered the news by insisting that it is "morally reprehensible" to fail to equip British troops properly – something we also discuss on the blog.

Of the MSM though, only Booker sees the point. Picking up on our posts here, here, here and here, he writes in his Sunday Telegraph column today, adding his own distinctive touch to the argument: 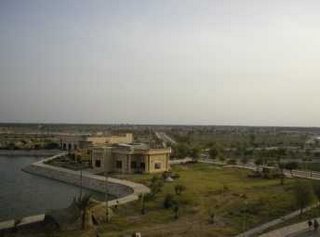 Nothing should have brought home more chillingly the failure of our military presence in Iraq than the fact that last week we had to evacuate all our 200 civilian officials from the Basra Palace complex, refurbished at a cost of £14 million (including an upgrade of the swimming pool) to enable them to bring the area peace and democracy. Saddam's former palace is also the British Army's headquarters, and it is a measure of its impotence that it can no longer defend its own HQ against insurgent mortar attacks.

To do so would require a combination of counter-battery radar equipment, to detect where the bombs are coming from, with helicopters on patrol to provide the necessary instant response. We have the radar, the Mamba, but the Ministry of Defence has not seen fit to provide our troops with the helicopters. In the whole of Iraq we have only six Lynxes, used for a range of roles, not including protection of the army's headquarters, which is why our command staff have to spend much of their time hiding under tables from 15 or more mortar attacks a day. 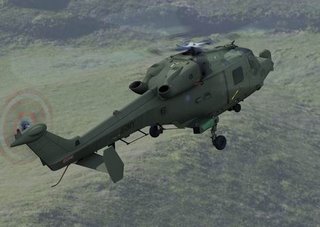 The MoD does plan to buy 70 "Super Lynxes", at £14 million each. But these will not be available until 2012, to help us play our part in the European Rapid Reaction Force. Meanwhile the US Army in Iraq buys off-the-shelf commercial helicopters at less than £4 million each, to play precisely the supportive role our own troops are so desperately in need of, in the real war they are engaged in; while the MoD pays nearly four times as much for machines to equip our men to take part in some fantasy army of the future.

Booker then refers to this blog and points out that Britain's police forces are now better equipped with helicopters than the British Army. "It is hardly surprising", he concludes, "that it can no longer even defend its own headquarters." He believes the lack of interest in ensuring that the Army can do the job is a precursor to Blair pulling out of Iraq altogether. My co-editor posits that it is a cock-up, while American Thinker writes of a "cultural conspiracy" in the sense that the Left has controlled the British media, educational system and much of its politics for almost a century:

The British Left isn't nationalist, but internationalist. Undermining the armed forces by propaganda and funding cuts is a basic part of the socialist faith: "no troops, no war" is the reasoning, if one can call it that. You don't need conspirators when it is done every day by the BBC, the Guardian, and much of the Labour and Liberal Democrat Parties.

Whatever the reasons, and American Thinker has more, we are observing an Army that is being undermined through lack of equipment. The lack of response to that had us worried, to the extent that we had to do a reality-check, concerned that we might be trapped in a private fantasy.

But we are not wrong. Without the kit – in this case the helicopters – the Army simply cannot perform, for want of which performance, Iraq must eventually be lost. And, writes Charles Moore, "If we do pull all our troops out, mock Blair and Bush, and hail some deal with Iran as "peace", we shall have a few weeks of self-congratulation, but that is all."