Against the law for MPs to save lives 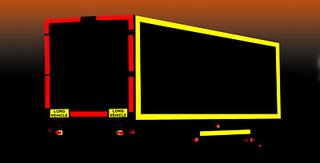 That's what Booker writes today, picking up on pieces we did in March, September and this month.

Amongst other things, he writes about retro-reflective tape. Because of the confusion between EU law and UN provisions, our own MPs were not allowed to introduce a law making this compulsory on large lorries. As a result, the figures suggest that there are more than 300 people alive in Britain today who, because Parliament could not make its use compulsory, will by 2011 have met with very nasty deaths.

That is 300 dead people - real people, flesh and blood, whose lives could have been saved... yet another benefit of the EU. And there are plenty of others that Booker discusses.

But hey! Who cares ... it's only Booker ranting. Don't have to take it seriously chaps - he is a Eurosceptic, after all. What's a few more corpses littering the roads? Small price to pay for keeping the peace between France and Germany, old boy!