I cannot resist this 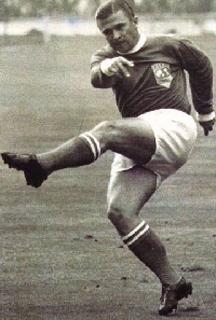 Alas, what I am doing today is reporting yet another death but one with significance to fewer people than that of Milton Friedman. It was announced today that the great footballer, possibly the greatest of the twentieth century, Ferenc Puskás has died at the age of 79 and after a long illness.

As it happens, his ongoing and progressive Alzheimer’s has been followed with interest by the whole of Hungary and the international sports community (except for the ones involved in trying to explain how it is that the 2012 Olympics are already scheduled to cost twice as much as originally promised).

I have written about the great Hungarian team of the 1950s and its political significance and of the importance of the 1954 World Cup and the final (in which Puskás did not play because of injury) both to Hungary and to the two Germanies.

I was rather puzzled by one encomium by an English footballer about Puskás Öcsi (Younger Brother or Young ‘un) being a humble sort of person. As a matter of fact, he may have been modest in the way he lived and in his generosity towards kids who wanted to play with him or be taught by him, but he knew very well his worth to the Communist state of Hungary.

Incidentally, the Guardian seems to be constitutionally incapable of going into any kind of explanatory detail about the Hungarian uprising of 1956. The football team went to play in Melbourne that autumn in the Olympics. A very large proportion of that Olympic team stayed in the West and almost the entire football team. One wonders how many of the water polo team refused to go back after the infamous final against the Soviet Union.