We are all going to die 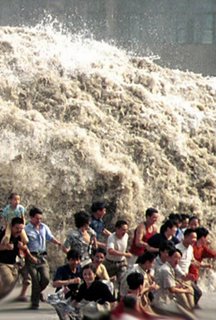 1. Global warming is the greatest threat which has ever faced the human race.

2. Unless very drastic steps are taken immediately, human life as we know it will end in the next five minutes.

3. It is now an unchallenged fact that, as CO2 levels soar to unattainable levels, scalding hot giant tsunamis will sweep across the world at millions of miles an hour, leaving a path of unprecedented devastation in their wake.

4. No form of life will be left unscathed, from the mighty elephant down to the humblest bacteria.

5. That includes the human race, who faces imminent and painful extinction unless extremely drastic steps are taken by responsible governments acting in the best interests of humanity as a whole and those of future generations.

6. It is too late for mere talk. It is now the time of action - and unprecedentedly drastic action at that.

7. There can be no half measures.

8. There is only one possible way in which the planet can be saved from a fate too horrible to imagine.

9. Taxes will have to be raised immediately. And by quite a lot.

10. And, to be honest, Gordon's run out of money, so this end-of-the-world-thing couldn't have come at a better time.