And a very happy birthday to you, too 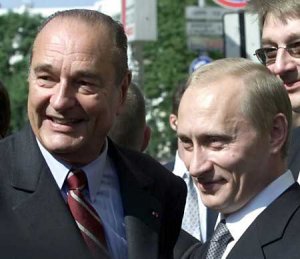 After the rather damp squib of the EU-Russia summit (well, they did agree that at some point very soon Russia will allow Siberian overflights without having to pay toll to Aeroflot) and the general coolth between the West in Russia (not unconnected with mysterious deaths of people who have written interesting accounts of what goes on in Putin’s Russia) l’escroc Chirac decided to take a hand.

It is his 74th birthday today and he has invited his bestest friend President Putin to Riga where the NATO summit is busy not coming to any agreement (but I shall leave that to my colleague).

A statement from Chirac's office in Paris said: "President Putin expressed the wish to meet the president of the republic to extend his best wishes as he has done with other heads of state and government."

"Since the president of the republic is in Riga for the NATO summit, Russia proposed the idea of a three-way dinner at the end of the summit, which the President of Latvia, Mrs. Vaira Vike- Freiberga, would host," it said. The Latvian president's office had no comment.

Maybe President Putin or President Chirac had forgotten that Latvia is no longer a Russian colony.

This is a particularly difficult time as far as France and NATO are concerned (though, come to think of it, when is it not):

Paris is opposed to NATO's establishing special partnerships with Australia, New Zealand, Japan and other countries participating in NATO missions. Paris also dislikes the idea of NATO training programs for the Middle East, arguing that the alliance could be used as an instrument of U.S. foreign policy.

Several European members (France and Germany, in particular) are opposed to Georgia joining NATO because Putin dislikes that idea. Georgia’s membership may or may not be a good idea but it should be discussed on its own merits not in a climate of fear of the Russian president’s heavy frown.

Anyway, the Americans and the Latvians, who as host nation were particularly displeased by Chirac's somewhat arrogant behaviour, can rest easy. President Putin excused himself from attending l'Escroc's birthday celebrations.