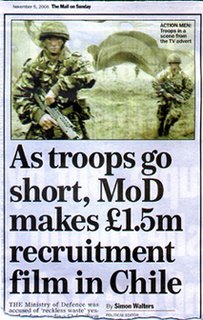 There can be no dispute that, when it comes to monitoring the performance of government, the media are definitely part of the problem – to which effect the Mail on Sunday today offers a graphic example.

The story itself looks worthy enough – the sort of "shock, horror, probe!" item that gets the juices of the average hack going, except that it is probably over-blown.

However, in the typical style of modern hackery, political editor Simon Walters had picked up this snippet and then contacts Liam Fox, shadow secretary of state for defence, for a ritual comment. A story is born, a few inches of space are filled, dead trees are sold and tomorrow's fish and chip wrappers are created. 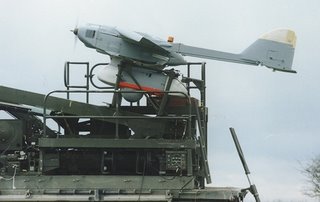 The point, of course, is that in a week when the British Consulate in Basra (recently refurbished at a cost of £14 million) has been evacuated for want of effective countermeasures against incessant mortar fire, not least helicopters but also because of the failure of the Army's Phoenix UAV programme – at a loss of £345 million.

By any measure, that is a bigger and better story, in purely journalistic terms. The fact that Simon Walters and the Mail on Sunday go for the trivial instead of the bigger picture betrays their fundamental amateurism.

However, one has also to point to the opposition parties – and especially the Tories. It is not is if they were not aware of the issues and have not had the opportunity to comment. Liam Fox's office could just have easy contacted Simon Walters to give him the story. But, once again, they have dropped the ball and have also missed out on the bigger picture.