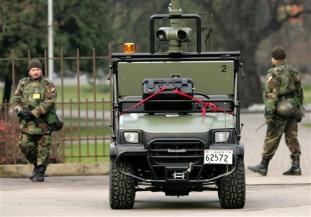 There is so much happening at the moment that stories are stacking up on my machine waiting to be done. The danger is that you get overloaded and end up writing nothing.

One to watch is the outcome of the Nato summit in Riga. According to the Canadian Globe and Mail - a paper I am rather warming to – this has been far from an unqualified success. Says the paper:

Nato leaders put on a brave faces of unity Wednesday but managed to scrape together only a few hundred more soldiers to send to Afghanistan. "We came here expecting to make real progress and I think we have done that," said Nato Secretary-General Jaap de Hoop Scheffer at the end of a two-day alliance summit in Latvia. But he admitted that newly pledged forces from the 26-nation military alliance amounted to only "several infantry companies" — meaning perhaps 500 soldiers.

This I must write about at some length in due course as there are important implications - is this really the best we can do?

Meanwhile, there is also a story unravelling - via Michelle Malkin - another increasingly suspect attempt by AP to manipulate the news. I'll try and do a treatment on this later but will concentrate on producing the third part of "retreat from politics", which I hope to have up today.

The photograph, incidentally, is of the near-deserted streets of Riga in Latvia, guarded by troops as Nato leaders hold their summit. I love the "toy" – does anyone know what it is?