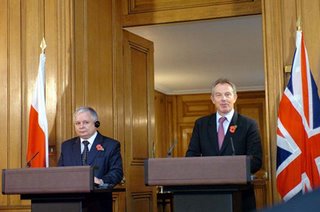 Nice report on the Polish president's visit to London here.

Polonia Radio reckons the visit has been a success, even the trip to Scotland, where the president appealed to the thousands of his people who have settled there to return home to help revive the country's economy.

This is incredibly bad timing, when you think about it though, given the US mid-term elections. The media has given the visit scant attention and there has been no mention of an EU army or Nato discussion that I can see. Blair and Kaczynski were, however, asked in the press conference whether they had discussed it. Said Mr Kaczynski, in this extract from the transcript:

No, we did not speak about this. It didn't fit within the range of issues we have discussed, but that does not mean that I will refrain from telling you and the Prime Minister what I think about it. A few minutes ago I have mentioned NATO, it is linked of course. No idea presented by me or our Prime Minister or to do with the Eurocorps, some sort of European military presence, this has nothing to do with our very strong attachment to NATO, our membership of NATO, the membership of most of the EU member countries to NATO, though there are exceptions, there are some EU members who are not in NATO. So for us NATO is the basis of security for countries on the one side, North America, on the other in Europe, and Turkey, although Turkey to a large degree of course is in Asia. This has nothing to do with each other, NATO is the foundation whether a Eurocorps is set up or not. Well we are in favour of setting up a Eurocorps and we believe that should it exist it should be a part of NATO, no doubt about it.

Prime Minister: From our perspective we are in favour very much of strengthening European cooperation, but as the President says NATO remains the cornerstone of our defence relationship.

What is also interesting - and possibly significant - is that, in a meeting between the representatives of two EU member state governments, there is no sign of an EU flag. Check back to pics of meetings between Blair and Chirac to see the difference.

Picture courtesy of No. 10 Website – Crown copyright. Thank you.