UPDATE: "Myers thought his appearance was at a closed academic forum." See addition at the end of this post. 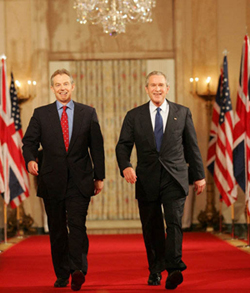 It is not just the lack of professionalism that gets you – it is also the pig ignorance, although it is difficult to see where one stops and the other starts.

Furthermore, the disease is not just confined to the Daily Telegraph today, where Toby Harnden has a story headlined: "Britain's special relationship 'just a myth'", which has a "State Department Analyst", telling us that "Blair has got nothing in return for supporting Bush over Iraq".

We see the same malaise more prominently on the front page of The Times, where Tom Baldwin in Washington and Philip Webster, political editor, write a story headed: "London's bridge is falling down" – a "Damning verdict on one-sided US-UK relations after Iraq".

Both papers report of a speech given by a man who goes by the name of Kendall Myers. Harnden refers to him variously as "a senior American official", a "leading State Department adviser" and only latterly, way down the page, as a "senior analyst with the State Department's Bureau of Analysis and Research" - a title that is actually wrong. We are also told by Harden that Myers was speaking in a lecture in Washington at the School of Advanced International Studies, part of the Johns Hopkins University.

Baldwin and Webster, on the other hand, content themselves with describing "Dr Myers" as a "senior State Department analyst" speaking at an "academic forum" in Washington. 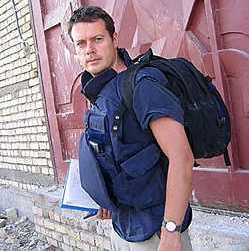 Therein lies the lack of professionalism. Actually, I am being too kind and too measured. These are lies - lies of omission. They cannot really be accidental as Harnden (pictured), writing in his own Telegraph clog refers to Myers as "an academic who is also a US government official". He knows but choses to omit that information from his piece.

Thus, lie number one perpetrated by the journalists in their respective print editions: Myers is not just a State Department official. Actually, he is not even a State Department official in the sense that such a bald description would imply – a policy-maker close to the centres of power. More accurately he is - as Harnden tries to tell us but gets wrong - a "senior analyst for the Bureau of Intelligence and Research at the US Department of State".

…provides value-added independent analysis of events to Department policymakers, ensures that intelligence activities support foreign policy and national security purposes; and serves as the focal point in the Department for ensuring policy review of sensitive counterintelligence and law enforcement activities. INR's primary mission is to harness intelligence to serve US diplomacy.

As to his academic credentials, he is billed on the leaflet adverting the speech which reports, as "SAIS European Studies Adjunct Professor" – information the hacks must have known. 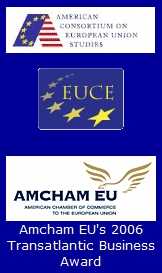 As to the "SAIS", this is the School of Advanced International Studies, which is part of John Hopkins University. More specifically, it is part of the Center for Transatlantic Relations, sporting these logos on its website. That, in turn is part of ACES, the EU Center of Excellence, Washington DC, an organisation which exists to spread information (i.e., propaganda) about the EU. It has "been recognized as the EU Center for Washington DC, one of a select number of Centers for European Union Studies in the United States."

Now for lie number two: the lecture (delivered on 28 November) was not just delivered at an "academic forum" or the School of Advanced International Studies, part of Johns Hopkins University. It was part of what was specifically billed (scroll down - advertised on the panel on the right of the page) as one of the "European Studies Lecure (sic) Series" organised by the Center for Transatlantic Relations. 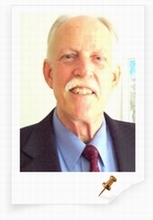 In other words, Myers, an obscure analyst (so obscure, we can only find one photograph of him, and then we are not even sure that is him) in an outcrop of the State Department, well down the food chain, is also an academic at an EU-sponsored institution - and not even a full professor - speaking at a seminar organised by that institution alongside other Europhiles.

Now, had we known all this, would it have made any difference to our perception of the stories presented by both The Times and The Telegraph? My suspicion is that it might just. In fact, with the full background, one might take the view that it was a non-story, simply an opinionated (and ill-informed) diatribe by a man of little consequence.

But the real killer is the same Kendall Myers, speaking in December 2003 in a seminar entitled "Global Geopolitical Trends: Is the Iraq War a Major Turning Point?"

Then Myers seemed to have a completely different view of his subject, saying that "the Anglo-American relationship is very strong, but it faces significant challenges within Tony Blair's party", then adding:

The Iraq war clarified the reality of a squirming, complex world. Within the United States, foreign policymaking has been decentralized. The State Department is marginalized and even the Pentagon, which calls the shots, is frustrated because the war has put unlimited American power out of business.

"Will the real Kendall Myers stand up?" one might be tempted to ask. But what one is not tempted to do is fisk his speech. It was not even worth printing. The man really doesn't know what he is talking about, has no idea actually what the "special relationship" is – a misconception he shares with David Cameron, a man who he apparently admires – and completely misunderstands its historical relationship with another, completely different and later policy of the "transAtlantic bridge". 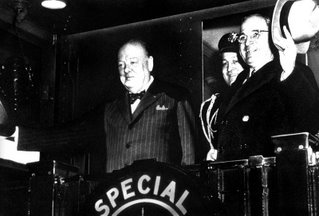 It is there that the journos show their ignorance as they blather unknowingly about both the "special relationship" and the "bridge". I really do not know what they were taught at school or their universities (amazingly, Harnden took a degree at Corpus Christi College, Oxford, being awarded a First in Modern History in 1988) but before they next start pontificating, perhaps they ought to read Churchill’s Fulton speech - all of it – and not just selected extracts from it.

This time, they should have listened to the State Department which, as The Times actually reported, had disowned Myers. A State Department spokesman, Terry Davidson, said: "The views expressed by Mr Myers do not represent the views of the US Government. He was speaking as an academic (an adjunct professor of European studies - ed.), not as a representative of the State Department." He was also speaking crap.

But then, had our dire, lazy and unprofessional hacks noted all this, they would not have had a story. And, as we all know, the story comes first. They should be - but of course will not be - thoroughly ashamed of themselves for their shoddy pieces of work.

The AP via International Herald Tribune is running a piece which tells us:

The State Department repudiated on Thursday comments by a veteran department analyst who said that British Prime Minister Tony Blair's relationship with the United States was "totally one-sided" in Washington's favor.

Deputy spokesman Tom Casey said Kendall Myers, the official who made the off-message remarks, was summoned by his superiors at the Bureau of Intelligence and Research to a meeting to explain his remarks.

"The comments, frankly, I think could be described as ill-informed, and I think, from our perspective, just plain wrong," Casey said.

Myers is a 30-year member of the civil service and is an expert in U.S. British relations. He spoke Tuesday to a gathering at the Johns Hopkins School for Advanced International Studies, where he is an adjunct professor. Casey said Myers thought his appearance was at a closed academic forum.

Er… excuse me! From the flyer advertising the lecture:

Lectures are open to the public. No reply is necessary. Lectures take place on Tuesday evenings in the Rome Auditorium (1619 Mass. Avenue, N.W., first floor). Talks begin at 5pm and are followed by a question and answer period. From 6:15 to 7:15pm, there is a reception for speaker and audience.

If Myers thought he was at a closed academic forum, then he is either more stupid than we thought or, as they say, being somewhat economical with the truth.