How could any of them be wrong? 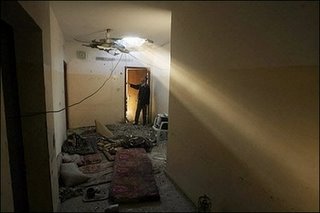 The more lurid Palastine sympathisers have it that the, "Judeo-Nazi army commits huge massacre in Gaza".

Thus we have writer Khalid Amayreh declaring that the "Israeli occupation army on Wednesday killed at least 25 Palestinian, mostly women and children in northern Gaza and the West Bank, apparently taking advantage of international media preoccupation with the mid-term American elections."

An eyewitness who identified himself as Abu Yousuf said he saw a decapitated child's head. "It was a real massacre. We are talking about heavy artillery shells weighing hundreds of pounds hitting homes packed with women and children. Even the Nazis didn't do that. It was like a slaughterhouse, only here we have humans instead of animals." 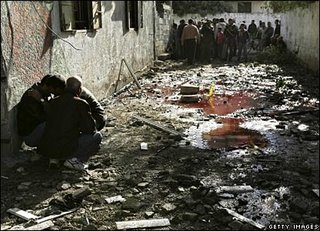 Another witness, Ra'ed Hasanin, accused the Israeli army of "indiscriminately, knowingly and deliberately slaughtering our children very much like the Nazis killed Jewish children at concentration camps. The Nazis may have used gas chambers to kill their enemies. But the Nazis of our time, the Jews, are exterminating Palestinian children, using artillery and warplanes. The result is the same, the mentality is the same."

Even from the completely impartial BBC we get Attaf Hamad, a "22-year-old eyewitness" cited as telling Reuters: "It is the saddest scene and images I have ever seen. We saw legs, we saw heads, we saw hands scattered in the street".

But have we been here before?

There is the Grossman story, the Battle of Jenin, Pallywood, the Al-Dura case, the Gaza beach shelling, the Lebanon ambulance hoax, Reutersgate and, of course, Qanagate. 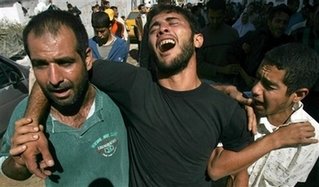 Are we then supposed to believe everything we are told about this incident? Do we even have a right to raise even the mildest query – such as asking about the curiously undamaged room (pictured) in which a shell exploded. Are we allowed to ask whether the blood in the streets was absolutely genuine - and human? And is it permitted to wonder whether the grieving relatives are actually related to the victims?

Or is it the case that, with Reuters, AP, AFP and the rest of them all there, everything has to be above board. How could any of them be wrong?