They come and they go 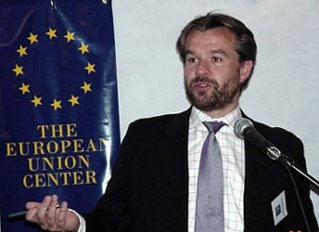 They don't last very long these days, the Commission's hand-picked Heads of Media in the UK. A new one has just been appointed: Anthony Gooch, who returns to these shores from Washington DC where he was Spokesman and head of the Commission’s Public Diplomacy operations for four years.

Now, I find that very interesting, as during those four years, in September 2003, to be specific I spoke at the Cato Institute in Washington DC at what was supposed to be a debate about the future of the European Union. The other speakers were Irwin Stelzer the writer, economist and journalist and Patrick Basham, Cato's constitutional expert.

One speaker was missing. The organizers had invited the Head of the EU Delegation to Washington DC to take part in the discussion. Dr Günter Burghardt agreed, then demanded we change the date, then pulled out with just about a week to go, pleading unavoidable business at the UN General Assembly in New York City. There were, of course, other theories as to why he had decided to pull out. I wonder whether Mr Gooch was responsible for that decision.