Moving to the end game 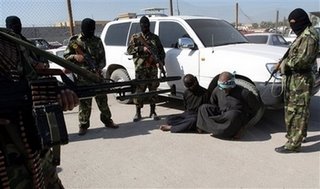 Foreign secretary (in name only) Margaret Beckett has announced in Parliament today that Britain could hand over control of Basra to the Iraq government in spring next year.

That would be the next and penultimate stage in the retreat started in August, when al Amarah was abandoned to the militias - with entirely predictable results.

In this post we argue that, whichever way you look at it, we are running away.