Tarred with the same brush?

On the Dutch de Volkskrant newspaper's website this morning, is a report that many hoped they would never see: "Dutch tortured Iraqis". Those nice Europeans, purveyors of niceness all round and thorough-going goody-goodies, unlike the barbaric Americans (and British), have been caught out. 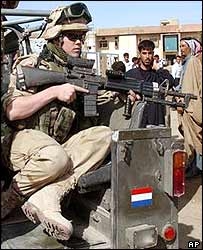 According to the de Volkskrant report, the incident relates to Dutch officers in the South Iraqi province of Al Muthanna. They are, the paper says, guilty of torturing dozens of Iraqi prisoners in November 2003.

The officers were from the a military intelligence and security service (MIVD) cell and carried out "hard-handed tactical interrogations". The report continues:

During interrogation, the suspects wore blindfolds so that they saw nothing. They were then alternately exposed to very bright lights without a blindfold. The Iraqis had buckets of water thrown over them to keep them awake and their hearing was stimulated with particularly high sound tones. The Legal Adviser who is required to be present during such interrogations was absent.

The Dutch Ministry of Defence has confirmed the reports. "Things have happened that are not appropriate in the instruction", said press director Joop Veen. Veen does not know if the case has been reported to Minister Kamp. "It was a long time ago and you cannot remember everything."

The Chief of Defence Staff, Luuk Kroon, was informed at the beginning of November 2003 of unrest in the Dutch camp concerning the treatment of prisoners. They were interrogated in an establishment of the Coalition Provisional Authority in As Samawah, by MIVD officers.

Kroon chose not to make the case public. Yesterday evening Kroon reacted to the findings of this newspaper: "I am retired, have drawn a line under everything and have no comment." According to Veen, Kroon told him yesterday evening that he could remember nothing. "Which does not mean that nothing was reported to him."

The Dutch Military Police in the camp were informed at the time by commandant Swijgman. Han Busker, president of the Military Police Association: "If this was known at the top of the Ministry, it is outrageous that no report was made. Then it has all the ingredients of a cover-up."

The Iraqi prisoners could be kept in custody for a maximum of 24 hours. After their interrogation, the prisoners and the obtained information was handed over to the British. The Dutch forces in Al Muthanna were under British command.

The Dutch battalion command listened to the British too much," says President Wim van den Burg of the military trade union AFMP/FNV. "What the officers did, they did on orders."

In a secret note to the Legal Affairs Directorate of the Ministry of Defence of 26th November 2003 it states "interrogation is not within the mandate of the Dutch units, neither does the questioning of witnesses."

Willy Weerkamp, until recently the public prosecutor of the Military Justice Chamber in Arnhem: "Nothing was ever reported to us, we have never had anything like it reported to us." 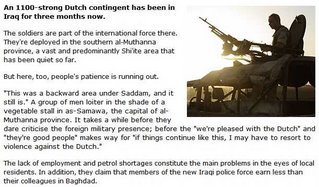 Compare and contrast this with a report in October 2003 from Radio Netherlands, headed "Something brewing at al-Muthanna".

Seems to me, if you read the report in full, that something was indeed going down then. And now we see a little more of what was happening behind the scenes. But you just have to love the bit where it reports on members of the Royal Netherlands military police training local police officers. We are told:

Often cultural differences emerge, particularly when it comes to ethics: "in the Netherlands, we are taught that you should never force a person to make a certain statement. Here, force is quite commonly used in interrogations. We try to put a stop to that."

The issue has now been picked up by the BBC, but with no mention of any British involvement.