Another day, another international proposal 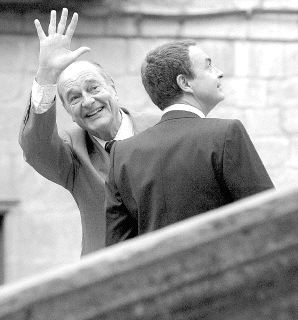 This one is the brain child of three European governments, those of France, Spain and Italy. Once again I ask: whatever happened to that pesky common foreign policy? As the BBC says:

The plan calls for a ceasefire and increased international intervention in the Israeli-Palestinian conflict.

An Israeli official said parts of the plan were being discussed, but it was not being taken seriously as it was not co-ordinated with the EU or Israel.

Well, indeed, how true. It seems the Israelis have finally learnt to play the game many of the Arab countries have known for a while: just play off those Europeans against each other. Have they consulted the EU? Oh dear, well, in that case, we cannot take any of this seriously.

This particular proposal seems to have been the brain child of Spanish Prime Minister Zapatero, in response to the Israeli attacks in Gaza that are in response to the constant barrage of attacks from Gaza into Israel. But, of course, once the Israelis start retaliating, something has to be done.

"We cannot remain impassive in the face of the horror that continues to unfold before our eyes," Jose Luis Rodriguez Zapatero said.

"Violence has reached a level of deterioration that requires determined, urgent action by the international community."

Since the Israelis have rejected the plan, there is nothing else to do but to put it to the EU summit in December.

The proposal would include an immediate ceasefire and the formation of a Palestinian unity government.

The other three components of the plan would involve an exchange of prisoners, talks between Israel's prime minister and the Palestinian Authority president and an international mission in Gaza to monitor a ceasefire.

What happened to recognition of Israel and Palestinian acceptance of peaceful means? Not a lot, it seems. Given that under the wise overseeing of UNIFIL in southern Lebanon (have the French produced the promised 2,000 soldiers yet?) Hezbollah is steadily destabilizing the Lebanese government and acquiring more arms from Syria and Iran, the notion of an international mission to monitor a ceasefire seems to be somewhat laughable. Oh, and by the way, will they monitor a ceasefire between Fatah and Hamas because that is threatening to spread to the West Bank from Gaza?

In the meantime, according to the Jewish Post, there is some falling out between the three partners. While President Chirac insists that the three countries are going ahead with their proposal (now rejected), Prime Minister Prodi insists that these will have to go through normal EU channels.

As for the Socialist Spanish Prime Minister:

Zapatero, who was photographed with a kaffiyeh at a Socialist rally in Spain in the summer, is not perceived in Jerusalem as a balanced interlocutor. And his foreign minister, former EU special envoy Miguel Moratinos, is widely viewed in diplomatic circles in Israel as someone who is constantly trying to raise Spain's profile and to carve out a large role for Madrid in the Middle East process.

What with the European Parliament passing various resolutions and this peace initiative, there is a renewed call for Europe to re-start the stalled peace plan or road map. The Israelis insist that negotiations have to be done between the “parties to the conflict”. The trouble is that no initiative is going to achieve anything while one party to the conflict refuses to negotiate and sees its aim as the destruction of the other.