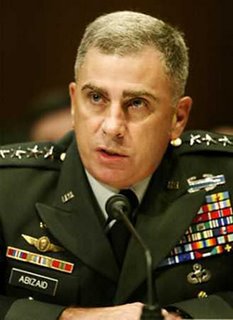 Confronted by the newly empowered Senator Hillary Clinton, US General John Abizaid, head of US Central Command, was having none of her bluster.

US hopes for Iraq have not met many of the administration's promised milestones, the Senator pronounced, declaring: "Hope is not a strategy."

Yup said Abizaid, but, "I would also say that despair is not a method. And when I come to Washington, I feel despair. When I'm in Iraq with my commanders, when I talk to our soldiers, when I talk to the Iraqi leadership, they are not despairing. They believe that they can move the country toward stability with our help. And I believe that."