Not a pretty sight 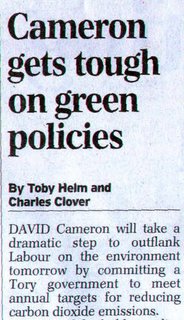 In conversation with a grown-up in the pub last night, I heard myself say words I never thought I would hear – that I have a greater affinity with our current prime minister, Tony Blair, than I do the leader of the opposition, David "Boy King" Cameron.

The headline opposite, in a way, illustrates the reason. While the Boy is to "get tough" - but only on "green policies", with Blair, you get the feeling that he is at least a man… Loathsome he is, disagree with him we do - and all the rest – but he is a man who is addressing some of the real world problems.

And, when you talk to grown-ups, which I do occasionally, it is not the greenie-weenie issues that come to the fore (other than to denounce the ludicrous Stern Report) but national security and the war against radical Islam.

Thus, while the Boy Wimp was twittering, the grown-up Mr Blair was giving his annual foreign policy lecture at the Lord Mayor’s Banquet in the Guildhall, talking about world security and diverse other matters. 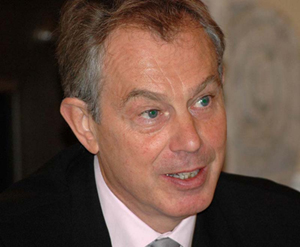 Amongst other things – and different media outlets had their own "takes" on the speech – the official line was that Blair "set out the importance of Britain's partnership with both America and Europe," and warned that it would be the "surest route to the destruction of our true national interest" for Britain to give up either relationship, both of which are "precisely suited" to us.

This is the classic "foot in each camp" policy devised by the Foreign Office in the '60s and used to convince Macmillan and every prime minister since that membership of what is now the EU did not put us at odds with the US. This is the policy where the UK somehow, miraculously, forms a "bridge" between the United States and Europe, a unique role that makes us invaluable to both sides.

On that basis, Blair is able to say - almost certainly without realising the provenance of the policy - "…our partnership with America and our membership of the EU are precisely suited to Britain." He thus feels it would be "insane" for us to give up either relationship. "Anti-Americanism or Euroscepticism are not merely foolish they are the surest route to the destruction of our true national interest." He then concludes:

Both alliances are founded in history. Both are, however, now, at this point, utterly validated by the future. These are no misty-eyed products of sentiment, relics of a bygone age to be taken out and cradled fondly. They are the vital life source of British power, influence and weight in the new global community taking shape around us. To nurture and enhance them is not vain glory. It is the most hard-headed realism. Lose them - and alliances are like all living things, neglect them and they die - and we will spend a long time struggling to revive what's gone. When people say: yes, but we want a "British" foreign policy, I say: of course we do, but in today's world a foreign policy based on strong alliances, is the only "British" policy which works.

What Blair clearly does not understand – or perhaps is not prepared to concede publicly – is that it is impossible to have a balanced portfolio of alliances with incompatible allies. To suggest that Britain can be both allied to the US and to the EU – thus bridging the gap – is, as we have observed elsewhere, like standing on the gap between the two halves of Tower Bridge, just as the bridge is opening.

Not a pretty sight.