Sovereignty up in smoke 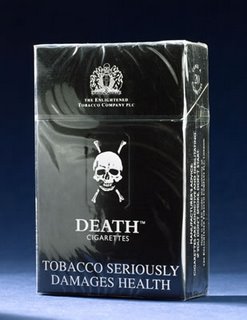 If the Sunday Telegraph and other media organisations – not least the BBC - have got it right, the chancellor might be about to suffer another multi-billion pound hole in his coffers.

This may arise if the EU Court of Justice (ECJ) rules next week that British shoppers have a right to buy alcohol and cigarettes from the Continent without leaving home – by mail order, telephone or internet - and pay duty at the rate levied in the country of purchase rather than in the country of residence.

As this is often only a fraction of that charged in Britain, a massive number of people are expected to take advantage of this ruling, if it transpires, putting at risk a very large part of the annual £15 billion Gordon Brown collects from tobacco and booze duties.

Yet, if this does happen, it will represent a stunning development on a 1998 decision by the self-same ECJ which effectvely ruled that such goods bought in EU countries could only be imported at the rate of duty paid in the country of origin if imported by the purchaser in person.

That case itself arose from the actions of two south London businessmen who in 1994 decided to call the bluff of the EU's Single Market. These were B J Cunningham and Stan Bertelsen, then directors of the Enlightened Tobacco Co, who were marketing a brand of cigarettes called "Death" – "a responsible way to market a legally available consumer product which kills people when used exactly as intended."

When they were blocked by the established cigarette manufacturers, they hit upon the idea of bringing in cigarettes from Luxembourg via a subsidiary known as the "Man in Black", acting as agents for the purchasers of the cigarettes.

This used the provision of the Single Market Directive 92/12 which allowed individuals to pay duty at the point of origin only but, because the directive restricted this privilege to people who made the purchases themselves and were not engaging in a commercial enterprise, Enlightened Tobacco also relied on a principle in British law that, for legal purposes, an agent and the person for whom he acts are one and the same person.

For a while, Enlightened Tobacco were able to sell cigarettes at Luxembourg rates of duty. Not surprisingly, the scheme was tremendously popular as the company only charged a small commission on top of the lower duty rate. But it could not last. In February 1995, HM Customs and Excise began detaining the imports at Dover until UK duty was paid.

The company took the decision to the High Court where it came before Mr Justice Popplewell, to find itself opposed not only by the government but also the giant Imperial Tobacco Company which saw a serious threat to its 35 percent share of the UK market.

To stay in business, Enlightened Tobacco relied on the agent principle but the court was not impressed, and neither was the ECJ was the case was eventually referred there. On 2 April 1998, it pronounced its verdict, ruling that none of the language versions of the directive "expressly contemplated the intervention of an agent" and that the scheme in any case fell under the provisions governing mail-order sales, under which excise duty is payable in the state of destination.

This could not, of course, stop the infamous booze cruises and, by 2001, more than one-fifth of all cigarettes sold in the UK had been black market, amounting to more than £3.5bn a year in lost taxes. The cut-price beer arriving from across the Channel each day was said to equal the weekly sales of 1,000 pubs. That the trade existed at all, however, was in no small measure due to that remarkable decision in 1998.

But now, it seems that the ECJ is to accept that individuals can buy from abroad and someone else can arrange the transport, provided they are not doing this as a business.

This is what emerges from the preliminary ruling was made on 1 December 2005 by Advocate General Jacobs in the case of Staatssecretaris van Financiën v B.F. Joustra (C-5/05). That in turn arises from a reference from the Dutch courts, the case brought initially by the Dutch excise against Mr J F Joustra.

Mr Joustra, it seems, and 70 other individuals, belong to a group called the Cercle des Amis du Vin (circle of the friends of wine). He, on both his own behalf and that of the members of the circle, orders wine in France and organises a Dutch transport company to collect and deliver it to him.

The wine comes from producers which members of the circle had visited on holiday. The delivery was supposed to save them carrying it home themselves with excise duty paid on the wine in France.

Mr Joustra made no profit on this activity, charging members only for the cost of the wine and a proportion of the travel costs. But, in 1997, as the operation expanded, he was granted the status of non-registered trader and the Dutch authorities demanded excise duty on the delivery, claiming that this activity did not fall within the "non commercial" requirements of 92/12.

Joustra appealed to the Dutch courts and the case was eventually referred to ECJ for clarification, with the preliminary ruling now due for confirmation (or not) next week by the full court.

If the Court does as expected, however, the issue is perhaps not quite as straightforward as the media makes out. From a look at the preliminary ruling, the advocate general seems to be making a fine distinction on Article 8 of the directive, which provides that excise duty on products "acquired by private individuals for their own use and transported by them" is to be charged in the member state of acquisition.

In the first instance though, the purchase must be made by the individual (or someone acting on his behlaf, but in a non-profit-making capacity) in the country of origin. Then the whole case seems to hang on the transport. If this is arranged on behalf of the purchaser, rather than the vendor, again on a non-profitmaking basis, then only the duty in the country of origin needs to be paid.

This does, however, allow the individual to purchase goods anywhere in the EU – by internet or other means but, it seems, they must either arrange their own transport or get someone else to do it for them on a non-profit basis.

Depending on how exactly this works, and how many people go for the option, it could cost Mr Gordon Brown between £5 and £10 billion in lost excise duty. For smokers and boozers, that would be good news, except that Mr Brown will not be cutting back his expenditure. Instead, he will be looking elsewhere for his money, reflecting that, when it comes to the sovereign right of a state to charge its own taxes, that sovereignty seems to have gone up in smoke.