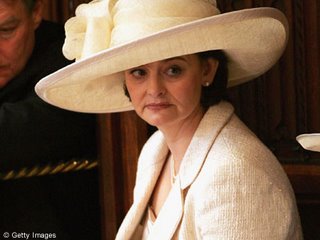 Through PajamasMedia I find a hitherto unknown to me blog, Brutally Honest, which boasts of “plain thoughts, delivered roughly”. Usually, that sort of thing makes me run a mile, rather the way I used to run from students who told me that they were “rebellious”, “alternative” or just “unable to pretend”.

All the same, this posting is worth reading. Apparently Cherie Blair, erstwhile first lady and still wife of the Prime Minister, as well as sister to one of the “I’m a Celebrity, Get Me Out of Here” participants, had been invited to give a talk to the students of Roehampton University. She proceeded to use this talk to attack journalists and journalism, proclaiming that there was “no professional morality in journalism”; that journalists “have no ethics”; and that it was “not a noble calling”.

According to the Independent, the students were stunned. Stunned, I tell you. I find that rather hard to understand. Who actually believes that journalism is a noble calling or that journalists have ethics? As for professional morality that tends to have something to do with getting a story and publishing it, which is precisely what Mrs Blair seems to dislike about them. Presumably, if the stories were entirely positive and drooling as they were in the early days of the Blairs’ rise to the top, she would not be calling the kettle black.

One assumes that the woman dislikes the fact that the press has published details of the many freebies she has collected over the years and the personal use she has put her husband’s position. A lecture in the United States, while the two of them were there on an official visit, for which she was paid and which was, outrageously, introduced by the British Ambassador springs to mind.

Other lectures about being a Prime Minister’s wife accompanied by “shopping” trips where no money changed hands also seem to loom in one’s memory. Hairdressers’ bills, anyone?

And don’t even get me on the subject of those nauseating family holiday pictures.