We do not forget 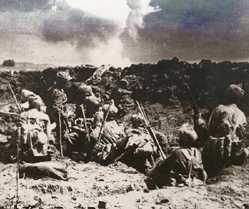 It seems otiose for this blog to suggest on the 88th anniversary of the Armistice that we should not forget. Barely a day goes by without, in one way or another, our remembering the sacrifices of our forefathers – and current generations.

However, in the current atmosphere – where immigration is so much an issue – we thought it appropriate to remember the battle of Neuve Chapelle, which started on 10th of March, 1915. Relatively small by contrast with later battles, the opening barrage comprised a modest 530 guns and howitzers, firing 216,000 rounds, making an average of over 400 rounds per piece.

One of the characteristics of the battle was the relatively large number of Indian and Nepalese (Ghurka) troops who were engaged in the fight. Then, as now, we were not alone – something we do not forget.