The curse of the Eurofighter 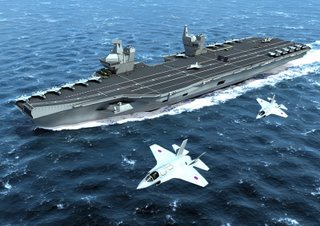 It's carrier time again, but with a difference. When we visited the story last, on 1 November, a decision on awarding the build contract seemed imminent. But, according to The Telegraph, it is not to be.

A decision on building the aircraft carriers faces further delays, says the paper, because the MoD and manufacturers cannot agree on the price. The ministry thinks the £3.8 billion asking price is too high and wants to shave £200 million off the tag. But agreement, we are told, is not even close and it will be next year before we get a decision – if at all.

Then there is the Lightning II Joint Strike Fighter (JSF), and despite the Dutch decision to go ahead with the purchase, and an Australian decision shortly, there is nothing yet from the MoD.

One cannot help but think that there are more to these delays than meet the eye, not least the strain on the defence budget as numerous defence contracts come to fruition. 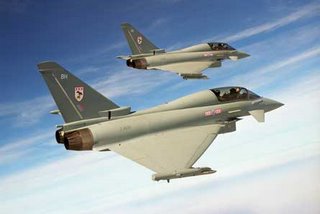 By far the most expensive of those is the Eurofighter. Now coming on stream, the production bills have to be paid and Gordon was no doubt looking to some relief from the Saudi decision to buy 72 aircraft, which would have come out of the British allocation.

But, with the news that the Saudis have suspended contract negotiations on the £10 billion deal, after concerns about a corruption investigation being carried out by the Serious Fraud Office, you can see why Gordon would want to delay making key decisions in other areas. He might be waiting until the dust has settled and he knows how much money he has to spend.

What we might be seeing, therefore, is the curse of the Eurofighter. Late into service and grossly over-budget, it was already casting a shadow over the defence budget and now it might just be affecting the carrier and JSF purchases. No wonder they want to call it the Typhoon – a somewhat vain attempt to break the Euro-curse.