Another coalition in the making 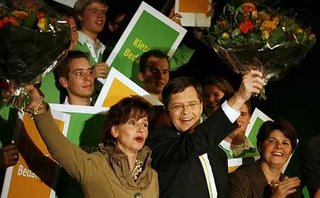 The Dutch election results have produced yet another political impasse. They are becoming the norm in Europe, which may be quite a good thing. Against all predictions, the Christian Democrat Party under the Prime Minister Jan Peter Balkenende has remained the largest party in the parliament but has no outright mandate to form a government.

Balkenende will have to negotiate with his opponents in the Labour Party (who are somewhat disappointed by the results) and a. n. other, possibly the old-fashioned Socialist Party under the former Communist Jan Marijnissen, who has already ruled out (for the time being, anyway) the possibility of going into a coalition with the CDA.

As Balkenende put it:

It's a very complicated result. Of course you can imagine I'm very happy with the results for the Christian Democrats, we've made enormous progress during the last months, we've had an excellent campaign and the most important question was, which party will be the largest party in the Netherlands, because you can take the lead from that information.

So I really hope I can go on as the prime minister, but that depends on the new coalition and that is really a complicated situation at the moment. Nonetheless, we will have meetings of the main political groups in the parliament tomorrow (Thursday) and then the whole process will start as far as building the new government is concerned.

As yet we do not know whether has begun and on what terms.

Interestingly enough, and again despite predictions, a high number of votes went to the smaller parties at both ends of the spectrum, including the anti-immigration Partij voor de Vrijehid (Party for Freedom), led by Geert Wilders, the man who has to live in permanent hiding after threats made by the murderer of the film-maker Theo van Gogh. They have nine seats, more, as Mr Wilders pointed out, than the Green Left.

Before anyone asks, it does not look as if Europe, the European Union and that pesky referendum had been high on any party's political agenda.

It looks like months of negotiating and log-rolling is in store for the Dutch people, who have shown themselves to be somewhat dissatisfied with the ruling consensus.