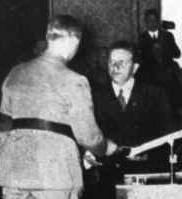 Most people have heard of the phrase supposedly said by Reichsmarshall Hermann Göring: “When I hear the word culture I reach for my revolver.” In fact, he may not have said it and, even if he did, so did other Nazi leaders, such as Rudolf Hess. The real phrase came from a Nazi propaganda play by Hans Johst, whose artistic and theatrical ideas seem to be an uncanny mirror of those enunciated by such luminaries of Communist literary agitprop as Bertolt Brecht.

Somewhere in what sounds to be a mind-numbingly boring play, “Schlageter” about the man who was executed by the French in 1923 for resisting their occupation of the Ruhr through sabotage (you learn a lot on this blog), one of the other characters says: “Wenn ich Kultur höre ... entsichere ich meinen Browning”. “When I hear of culture … I release the safety catch on my Browning.” Much neater, I think.

We might have to learn some of those lessons as we confront the kulturkampf of the European Union and the British film industry, which has had as many revivals as the nation state has deaths. We know which one is alive and well, tax reliefs or no tax reliefs. Our latest post looks at the whole issue.