Repeat after me: I am Leader of Her Majesty's Opposition 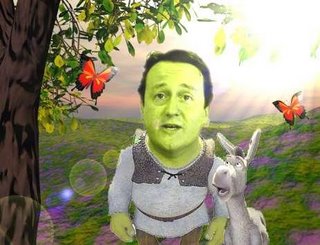 You may not know this, from the antics of the Boy-King of the Conservative Party (to give it its official rather than accurate name), but the Queen opened the new session of Parliament last week. In fact, this Blog covered her speech and its ramifications.

What some of our readers, particularly if they do not live in this country, may not realize is that the Queen’s Speech is debated in both Houses for several days, each day being devoted to one or two subject. So, errm, where are the Prime Minister and the Leader of the Opposition? Away, that’s where.

The PM is visiting the troops in Afghanistan. At least, he can claim that it is part of his job and, really, there is no convenient time for that if you start looking at the parliamentary calendar. Except that the beginning of last week was, as Parliament was not sitting.

But why is the Boy-King not in his place, leading the charge? My colleague has dealt with it in part, but I should like to raise other aspects of this issue, not just defence or toys.