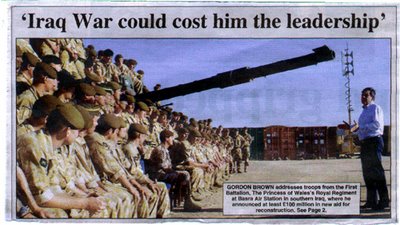 From the Scottish Sunday Post (no link) comes a perspective on Gordon Brown slightly different from what we are getting from the Westminster-obsessed media.

This is from back bench Labour MP John McDonnell, the only MP so far to declare as a rival candidate for the Party leadership, against his fellow Scot.

McDonnell, who is essentially functioning a stalking horse, says that the Iraq war could cost Brown the leadership, so unpopular is it amongst the party membership and the unions.

Polemics this might be but it reminds us that, as a new prime minister, Gordon Brown will have to chart a very careful course if he is to avoid a major rift in the party.

Nevertheless, Brown's visit to Basra yesterday puts him firmly in the "pro-war" camp, while the Scotsman is also telling us that, as prime minister, the chancellor will maintain his opposition to the euro.

One wonders whether the Boy will be taking his cue from this and, in his quest for "clear blue water", is lining the not-the-Conservative-Party up for an anti-war, pro-euro stance.