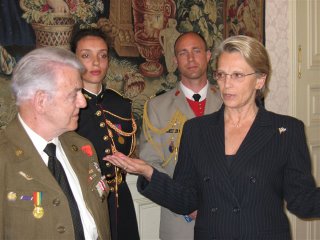 Over 500.000 people turned out for Pierre Gemayel’s funeral in Lebanon and the procession swiftly turned into an anti-Syrian demonstration. Alas, we have been here before with Rafik Hariri’s funeral and numerous others. Nothing, it seems, can prevent the Syrians and their proxies, the Hezbollah from destroying the Lebanese Cedar Revolution and the state of Lebanon itself.

Why should they care? The UN may huff and puff but will not blow any terrorist’s house down, be it made of sand or straw. If Israel, the only power prepared to take on Hezbollah, comes anywhere near inflicting any damage on that organization, the international community unites in imposing a cease-fire that allows terrorists to operate with impunity.

In Britain and the United States, meanwhile, the “realists” are “winning the argument” with the help of the MSM who seems to be incapable of any unbiased, knowledgeable reporting. Sadly, we can all remember what happened when there was a similar situation: helicopters taking off the roof of the American embassy in Saigon and an appalling mess left behind in Vietnam and Cambodia.

But hey, there is a UN force in Lebanon. It may not be quite as large as it was promised to be (it is not at all clear, for instance, whether the 2,000 French are actually there) but it is there and its mandate is – well, now, it is hard to recall the details but I do believe disarming Hezbollah came into it somewhere. Except that UNIFIL has long ago announced that it will do nothing of the kind, because those nasty Hezzies might shoot at them.

What if Hezbollah fires rockets into northern Israel? Well, honestly, we cannot be everywhere.

Still, UNIFIL knows who the enemy is: Israel. According to the Jerusalem Post, a senior French officer has explained that should the IAF fly over the French troops again, they will be allowed to fire at the aeroplanes. It seems that the October 30 episode really unnerved the troops and up with this they will not put. What they will do should Hezbollah fire anything is unknown.

There is some suspicion in Israel that this posturing has something to do with the forthcoming presidential elections in France and the possibility that the Defence Minister, Michèle Alliot-Marie may well decide to run. Or at least announce her candidacy. (Alliot-Marie against Royal? Now there’s a contest worth watching.)