Be afraid, be very afraid 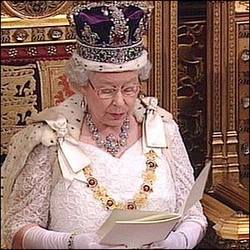 Tim Worstall has reactivated one of my favourite Private Eye covers, reproduced here as well (with apologies to certain readers of this blog who have been editors of that estimable publication). The caption on this cover, published in 1964, is: “I hope nobody thinks that I wrote any of this crap.”

Well, no Your Majesty, we do not think this and we are full of admiration at the way you can read out the most appalling things year after year without batting an eyelid and without falling off the throne with mirthless laughter.

At least these speeches are not very long, brevity being all-important when the government does not want to tell the people too much about its plans for the next session.

So, let us have a look at the delights in store for us.

Let us ignore the blah at the beginning about facing up to challenges, maintaining low inflation and sound public finances (maintain? Really?) and providing secure and stable communities. At best the government can do nothing about most of it. At worst – and we have been living with the worst for some time – they can cause a great deal of damage. Let us look at the proposed legislation, instead.

Well now, another year, another Criminal Justice Bill, which will give “the police and probation services new powers to protect the public from violent offenders and anti-social behaviour”. That’s nice. But, as it happens, the police and probation services have all the powers they need and then some. They just choose not to exercise it for various reasons. Presumably, the new powers will be to tackle people who are handing out Christian leaflets at Gay Pride marches or demonstrating with the Countryside Alliance.

Interestingly, there is a Bill in waiting that will “provide the immigration service with further powers to police the country’s borders, tackle immigration crime, and to make it easier to deport those who break the law”. Really? I suspect the European Commission and the Council of Europe, not to mention the European Court of Human Rights might have something to say about that.

And, of course, there will be another attempt to introduce ID cards and trial without jury for serious fraud cases. What will the ID cards do, even if we assume (and, really, that is a very tall assumption) that the government can introduce a working system for it? We have been told by particularly stupid senior police officers that they would have prevented the 7/7 bombing on the London Underground and bus. How?

Our problem is that our terrorists and would-be terrorists are home-grown. They are second or third generation British. ID cards are not going to solve that problem. In any case, what is the government proposing? Guards at every door of every train to check documents as we see in war films?

As for the abolition of juries that is a long-standing project of this and every previous government. It will start – unless the House of Lords, due for another bout of “reform”, saves us again – with serious fraud cases, on the spurious grounds that juries of ordinary men and women “cannot understand the intricacies of the case” and will go on to many other matters. One of the oldest protections of our liberties, one of the most important guardians against legal tyranny will disappear.

There will be a Climate Change Bill, which will, undoubtedly, pile on more taxes and more regulations to shackle British economy even further and to ensure that more of the existing industry goes to polluting countries like China. And all for what? Even if you do think that carbon emission is the equivalent of original sin, the truth is that Britain is responsible for no more than 2 per cent of it in the world. The other truth is that climate change is endemic and nobody knows precisely what its outcome will be; and the third truth is that only advanced technology can deal with environmental problems. But all that is too subtle for our politicians, as I do not see the Opposition, a. k. a. Not The Conservative Party, doing anything but supporting the likely mish-mash that will masquerade as legislation.

And so it goes: a Bill to reform welfare and reduce poverty (as if that was something the government could do). I bet there will be nothing about a tax reform that might take people on low income out of the tax system.

There will be a long-term reform of pensions. Will that involve more wrecking on the part of the Chancellor? Probably. Reform of the planning system might improve it thought that sounds unlikely. But let us give them the benefit of the doubt.

On the other hand, the proposal to improve arrangements for consumer advocacy and for the regulation of estate agents does nothing but send a chill down one’s spine. More form-filling and regulation for businesses; yet more difficult to buy property. Terrific. Let’s bring this country to a complete stand-still.

Sliding over several other threats, I come to the one that really makes one very, very afraid. “Bills will provide for reform of local government and enhanced powers for the Mayor and Assembly for London.” I know something about the latter. Its general tenor is to take more power away from the local boroughs and concentrate them in the hands of the Mayor, while ensuring that the neither the Assembly nor those boroughs can have any control over him and his “strategies”.

I think I might ignore the ineffable nonsense of most of the so-called foreign policy but three items are worthy of mention:

My Government will work with the United Nations and European Union partners to prevent the spread of weapons of mass destruction, including addressing international concerns over North Korea and Iran, and to promote good governance.

My government will continue to work to build an effective and globally competitive European Union and will also work to strengthen the North Atlantic Treaty Organization.

My Government will contribute to a modern and inclusive United Nations and will work to take forward the World Trade Organisation Doha talks.

Who writes this stuff?