It certainly is not political trivia but it does answer the question as to whether we have an opposition.

From the Sudan Tribune, but nowhere else of any consequence, we learn that the Boy Wimp - with shadow development secretary Andrew Mitchell holding his hand – has arrived in Khartoum on a short visit to Sudan. 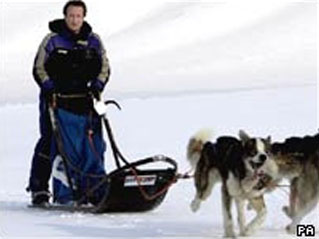 In what must be the most egregious example of gesture politics since he flew out in a private jet to commune with a glacier in Norway, the Boy is to meet Sudanese foreign minister, Lam Akol. With some handy snaps safely in the album, he will then burn the carbon credits with gay abandon, flying to Al-Fashir, capital of north Darfur state in Western Sudan.

There, he will strut his stuff for the cameras, in front of a carefully selected backdrop, and utter some finely-honed soundbites, all in the hope of catching the midday slot for tomorrow's television news – and all slots thereafter – demonstrating that the Girlie Party has showed concern over the Humanitarian Aid and the Protection of Darfur Civilians.

The Boy will conclude his visit on Tuesday and fly directly to London from Al-Fashir, in good time to appear at Prime Minister's Questions the next day. There, with all the authority of a day trip to town near a disaster zone, he will indulge in some more theatricals, again to demonstrate to the cameras that the Girly Party reely cares … about Black Peeple.

He will accuse prime minister Blair of permitting genocide, which he will claim is imminent, and demand immediate action by the British government, but only through The International Community, which – like Blair, he will say - needs to Face Up To Its Responsibilities. 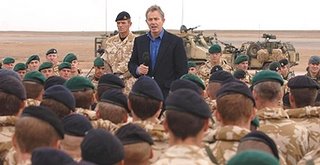 Meanwhile, our Tone – in a photo-opportunity he hopes will trump the Boy – has been addressing the troops in Camp Bastion, Afghanistan, telling them they are "fighting in the place where the world's security in the 21st century would be decided."

That, I suspect, is phrasing we will hear again on Wednesday, as the two leaders swap travel stories over the Despatch Box and the Boy tells us that the epicentre of suffering and the necessary focus for All Good Deeds is Sudan.

But, as The Telegraph chunters on this morning about Blair facing accusations last night that he is wasting nearly £7 billion of taxpayers' money on "a failing war on terror", I guess the one thing we are not going to hear about is more equipment and resources for our troops.

It really is quite remarkable that, in the last three days, Blair and Brown between them have trumpeted special funding to Iraq, Afghanistan and Pakistan amounting to £844 million. In the first two countries, the money is to aid "reconstruction" - but in deteriorating security situations. Yet not one penny extra has been allocated to the military effort.

At least The Telegraph is complaining about the waste, but who will speak for our troops while, at the risk of their own lives, they attempt to keep the peace?