When the fishing has to stop 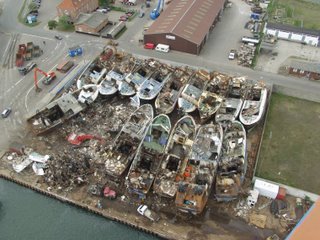 One has to commend the initiative on fishing by David Belamy and sundry Tories, including the indefatigable Sheryll Murray and Ann Winterton, described by The Daily Telegraph as "Cameron facing grassroots revolts".

They have written to Oliver Letwin, head of the party's policy review, asking him to reinstate the pledge to "restore national and local control over British fishing grounds", a policy agreed by Howard and two of his predecessors and firmed up after extensive research in fishing communities as far afield as Newfoundland and Norway by Owen Paterson, the party's former fisheries spokesman.

It was, nevertheless, unceremoniously ditched by the Boy Wimp when he became leader, although Paterson's Green Paper, strangely, is still on the Tory website.

As you would expect, the greenie-weenie Boy has been told that the CFP is an environmental disaster. But, according to the Telegraph, his spokesman says that, while he recognised there were problems, he was focusing now on the priority of restoring "national control over employment law and social policy".

And so the fishing has to stop.

The picture, in case you needed reminding, shows British fishing boats being scrapped under the EU's fleet reduction policy - the one that ended up in an increase in Spanish boats.

What you are not told, of course, is that they also scrapped the people. Scottish coastal communities now suffer some of the highest rates of unemployment and drug abuse in the country. Never mind though. The Boy Wimp says that if you vote for a fresh start, they can have "a Conservative government of change, optimism and hope"...