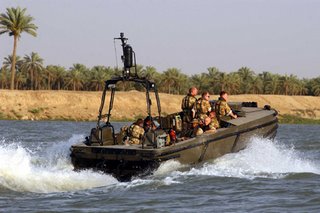 The loss of the Nimrod in Afghanistan apart, incidents were our servicemen are reported dead tend mercifully to involve small numbers.

By historical comparisons that remains the case but, by contemporary measures, the loss of four British soldiers in Iraq on Sunday, with another three suffering serious injuries, all in one incident is a major event. Defence Secretary Des Browne has offered a tribute, to which we must add our own.

What makes this very different is that the deaths occurred during an attack on an Army boat making a routine patrol along the Shatt al-Arab waterway in Basra. Apparently, the boat was hit by an IED, leaving Army spokesman Captain Tane Dunlop, speaking from Basra, to say that it was "slightly unusual" for the insurgents to target a boat.

We have no further details of the incident or of the craft involved, which could have been a Combat Support Boat (pictured top left) or a Rigid Raider (below right, furthest from the ship), both of which are used routinely by the Army to carry out patrols of the waterway, which borders with Iran and is a major route of oil and arms smuggling. 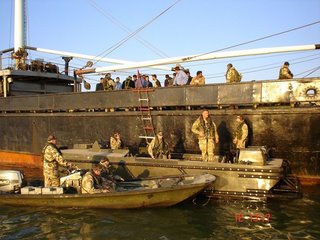 Once again though, with an upsurge in activity by the Army – currently engaged in "Operation Sinbad" – we are seeing a matching increase in violence from the insurgents. It is far too early to say whether these deaths could have been prevented but one has to ask whether a "routine" patrol was too predictable – and necessary.

In this context, the words of the Viscount Brookeborough come to mind and, although spoken in the context of land patrols, seem highly relevant to river patrols:

We must ask ourselves questions about the patrols, especially mobile patrols. Is a given patrol really necessary? What is the threat and why is the IED beside the road? Could the patrol be done on foot? If we have the heli hours, could we use helis to patrol at virtually no risk? Are the helis at risk?

Of course, as we well know, there is a serious shortage of tactical/patrol helicopters. Is this yet another effect of the MoD's procurement disasters?