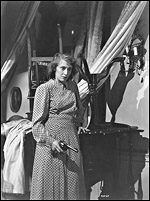 Overcome by catatonic boredom at the thought of the European Union and its goings on, I have, instead, been musing about the political structure in general.

My colleague has written the odd posting or two about the incompetence of both the military and the political leadership at a time when this country is at war. Surely, I thought, as I listened to his diatribes on the subject of "Snatch" Land Rovers and helicopters, the main problem is that so much of the establishment is not too certain about this war and is trying to undermine it. (More fools they, as the enemy has been planning and preparing for some years.)

Then I realized that I was doing exactly what so many novelists, thriller writers and, above all, film-makers were doing during the Second World War – getting obsessed with the Fifth Column.

People who actually bother to read my postings (and realize that they are mine and not my colleague's) would have noted my fascination with films of a certain vintage. Actually, any films as long as they are good but the ones of certain vintage are likely to be better. Among those I have watched in the National Film Theatre there were numerous thrillers, some excellent like the seminal "Went the Day Well?" some considerably worse, but all of which hinged on a presence of a vast network of pro-Nazi conspirators at all levels in this country.

While I have no doubt that if by some terrible mischance Britain had been invaded most people would have behaved exactly as their equivalents behaved in other countries, there is no evidence that there was a huge fifth column of Nazi supporters in this country. A few spies and traitors but that is all. (There was, as it happens, a huge spread of Communist supporters, but that is another story.) So why did so many people write about it or make films on the theme? And did they ever think the issue through? After all, if more than half the country and about three quarters of those in positions of power and responsibility are working for Nazi German victory, there might be some problem with the British system.

Recently I re-read one Agatha Christie's war-time novels, "N or M?". It is not highly regarded by the aficionados, being a Tommy and Tuppence tale but it is, as it happens, better than the last two in that series, "By the pricking of my thumb" and "Postern of Fate". Those are really terrible, though the first of them was turned into an enchanting film by the French Pascal Thomas. Once one gets over the problem of Tommy Beresford being Colonel Bélisaire Beresford, one is in for a rare treat. But I digress.

"N or M?" is about German spies and fifth columnists and takes place in 1940, during some of the darkest days of the war. There is a fascinating conversation between Tommy and Tuppence about a third of the way through. Tommy has been reading the news and hearing the terrible stories of bad management, inadequate equipment and complete lack of military coherence brought back by the soldiers who had been evacuated from Dunkirk.

Could it really be incompetence, he muses, or are there traitors among the highest echelons of the military command, the intelligence service and those who take political decisions. Without any hesitation Tuppence replies that it has to be treason. Clearly, she does not bother to think the implications of that statement either. Tommy agrees and the work they are engaged on becomes even more urgent.

Suddenly it all fell into place in my own mind. Of course, they were obsessed with fifth columnists. The alternative was to accept the fact that Britain, its security services, its military, its police, its politics were led by people who were incompetent, self-satisfied idiots. Alas, much of that was true. The best description of it is in another and far better novel or, rather, a trilogy of novels: Evelyn Waugh's "Sword of Honour". Curmudgeonly, depressive and a great novelist, Waugh had no problems about accepting unpalatable truths.

Of course, we prefer not to think about the incompetence of those we have placed at the top or allowed to rise to the top. That is a reflection on all of us. It is easier to imagine that they are traitors and that they choose to undermine this country and its fight against a very dangerous and determined enemy. (Now, as in 1940.)

In the same way, as I argued with Sebastian Gorka of the Hungarian Institute for Transitional Democracy and International Security yesterday, politicians lie because people do not want to hear the truth. Did the Hungarians really want to know the truth about the economy before the last election? Probably not. They preferred to listen to Ferenc Gyurcsány’s morning, noon and evening lies.

Do that many people in Britain want to know the truth about whether this country is still independent? I think not. Do they want to hear about the incompetence that is the besetting sin of the "best army in the world"? Certainly not. Did that many people bother to find out whether Edward Heath or, for that matter, Harold Wilson was telling the truth about the Common Market and its ramifications? Don't even ask. It must have been the fifth column that has got us into this mess.