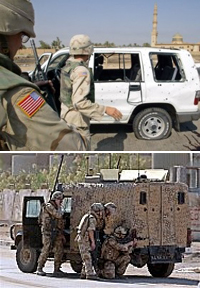 In broad daylight, it seems, Shi'ite insurgents yesterday stop a convoy and kidnap foreigners. According to the BBC report

Four Americans and an Austrian have been kidnapped from a convoy of civilians in southern Iraq, US and Iraqi sources have said. The convoy of 19 vehicles, operated by a Kuwait-based security service, was attacked on Thursday. Unconfirmed reports said the incident took place at a bogus checkpoint. Nine other civilians were released. Sunni-linked insurgents have killed dozens of kidnapped foreigners but most abducted in the south have been freed. Reports said the convoy was attacked near Basra as it headed for the city of Nasiriya. The foreigners taken were all security contractors.

And this morning, according to ABC News, there is holy war in Basra:

British ground forces and U.S. military helicopters fought with gunmen on Friday in an area of southern Iraq where four American security contractors and their Austrian co-worker were taken hostage after their convoy was hijacked, British and Iraqi officials said. Two of the gunmen were killed in the fighting, and it was not known whether the five hostages were being held in the area at the time.

If you join up the dots, you can see a clear pattern of escalation, with the insurgents getting bolder and more aggressive.

Rarely, in these situations, does the status quo hold. This seems to be coming to a head. Be prepared for some serious Shi'ite.