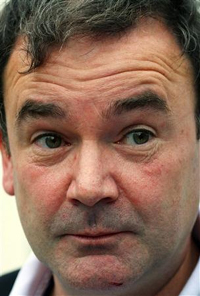 He may be the latest but he is by no means the first. "He" is Jon Cruddas, the Labour MP for Dagenham in east London, where the BNP won 11 council seats in May's local elections

And Cruddas is warning that more and more disgruntled Labour voters are switching support to the BNP. Furthermore, he is suggesting that people in Labour heartlands have lost hope and have turned to the party in protest at mainstream politics.

As early as December 2003, Labour politicians have been raising similar warnings, then being the turn of Scottish MP Michael Connarty who criticised the government's treatment of asylum seekers, declaring that it could "fan the flame of the BNP".

More famously, we had Margaret Hodge in April this year, who claimed that as many as eighty percent of white families in her Barking constituency in east London had admitted that they were tempted to vote BNP in the then forthcoming council elections.

Email ThisBlogThis!Share to TwitterShare to FacebookShare to Pinterest
Labels: BNP