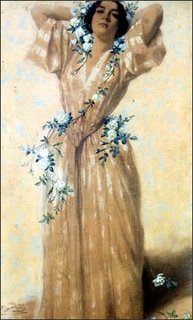 It is not at all certain that Ségolène Royal will actually win next year’s presidential elections but there is already some excitement around her possible title. Yesterday’s Daily Telegraph (and, no doubt, other newspapers) speculated on whether she will be called Mme la Présidente or Mme le Président.

Today’s newspaper has a letter from one Derek Brumhead who suggests that the definite article will have to be dispensed with.

That’s as may be but those of us who have delved into the by-ways of French history know that there was someone called La Présidente before. Alas, she may not be an example that a sober politician, partner of another politician and mother of four might wish to follow. Apollonie Sabatier was one of the best-known and most powerful courtesans of the Second Empire. Mistress of Charles Baudelaire, among others, recipient of scatological and pornographic letters from Théophile Gautier, she was also the model for a scandalous sculpture produced by Auguste Jean-Baptiste Clésinger and entitled "Woman bitten by a snake".

So much for that bit of correspondence. Of greater interest is another letter in today’s Telegraph on the subject of la Ségo's comments about Britain having to choose between Atlanticism and Europeanism (given the many problems France is facing, you wouldn’t think this was top of a would-be president’s agenda) from one Chris Sherwood.

It would be interesting to find out who Mr Sherwood is (of course, it might be a Ms Sherwood). He (or she) lives in Brussels but gives no reason for doing so. Businessman? Journalist? Eurocrat? He (what the heck, let’s assume it is a he) spends a good deal of time writing letters to various publications banging the Europhile drum, which has a somewhat rusty sound at the moment. On occasion he seems to have given the Lib-Dim HQ at the European Parliament as his address but he denies any connection with that group.

Unfortunately, his Europhile pronouncements can be referred to as “same old, same old”. This is what he says in his letter:

Sir – Miss Royal, in asking Britain to choose between the EU and the United States, has more in common with British eurosceptics than she knows. This choice is the one often peddled by the anti-European doom merchants, and it is a false one.

American policy on the EU has been unwavering in its support for further integration. The United States was instrumental in getting the EU's predecessor organisations up and running. It supported British membership, and would doubtless be fiercely opposed to its withdrawal.

The choice we have is whether to lead in Europe, and so become a more valuable ally for the United States, or to sit on the sidelines and watch it lose interest in us.

We can discard his comments about American attitude to the EU since that support for further integration has wavered somewhat in the recent past. To be quite precise, the State Department remains relatively unwavering and even they are not too sure; Defence, with or without Rummy, pours scorn on the whole idea, when not warning all sorts of dire consequences if the EU goes on developing alternative defence structures and the President happily negotiates directly with leaders of member countries friendly to the United States.

Still, one would like to know how that leadership in Europe is to be achieved, particularly if it means being a stauncher ally of the United States that way. How, precisely, does a member of a larger and mostly hostile organization can be deemed to be a stronger ally than an independent country that possibly takes its rightful place in the Anglosphere?

The words Iraq, Afghanistan and war against terror spring to mind. What was there to lead in Europe and in which direction? Has the United States really lost interest in its allies because they do not lead Europe? Why can't these propaganda merchants think of some new lines? Answer the last question first.