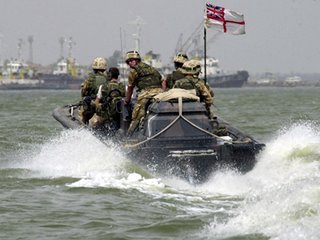 Never believe the MoD and never, never take any details in an MoD press statement at face value.

Even as of yesterday, this lying department of state was talking about "a routine boat patrol" when describing the bomb attack on Sunday.

Now we learn from The Daily Telegraph this morning that the four service personnel killed were on a "personnel move" from Basra Palace to another British base along the Shatt-al-Arab waterway. They were being moved by boat because this was considered the safest form of transport.

Despite the war-like action pictures being put about (above left) the two Rigid Raiders in the group on Sunday were carrying 17 personnel (including crews) and being used for nothing more glamorous and exciting than water-taxis. And it was one of these boats that got hit.

From The Scotsman we get the information that "British forces have routinely used the river as a transport route, to avoid sites where IEDs may be planted." But, says the paper, "in order to navigate the bridge, patrol boats have to pass close to the eastern bank, where the fatal attack was mounted." 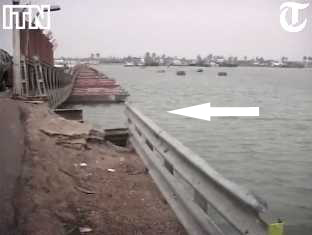 The site can be seen in the video grab (right), taken from the Telegraph/ITN footage, accessible from here. (This is copyright material taken without permission for the purpose of reporting news and making comment. If the owners wish to make an issue of it – sue me.)

Now, from what appears on the grab, the pontoon bridge rises at the point arrowed, allowing navigation by small craft – but making for an ideal (and obvious) ambush point. We are now told that "military sources are reviewing river security" which is a bit bloody late, with them saying that "the positioning and accuracy suggest considerable planning".

To me, it begins to look very much like someone (or several persons) cocked-up and one hopes that an inquiry will bring this to the fore. But that does not change the general points made in my overnight piece.

One of the best ways of protecting transiting personnel is to use helicopters, provided the general area is under control. Without that control, however, there can be tragic results , as occurred last May when a Lynx helicopter was shot down, coincidentally also killing a female – that time Flt Lt Sarah-Jayne Mulvihill, an RAF officer.

However, ground transport in "Snatch" Land Rovers has also proved unsafe and there are too few Warriors and they are being worked to death. They are not available for routine transport. In any event, by far the safest form of transport would be a mine protected vehicle, such as the Mamba, with or without a helicopter escort. 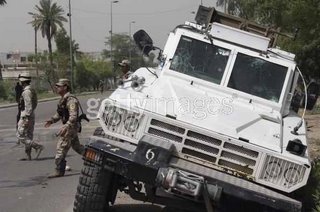 Once upon a time, we could have taken that option, except that we sold off our Mambas, which are now used by Blackwater Security Consulting … for transporting personnel in Iraq (having survived at least two IED attacks - one pictured).

Alternatively, we could have bought the more modern and reliable RG-31s, which we had on trial in 2003 and could have had in service now – as have the Canadians, whose vehicles have survived mines and suicide bombs. But no! Instead, we bought freakin useless and vastly more expensive Italian Panthers, which can't be used in Iraq and anyway are still not in service.

So we send our people to their deaths in unarmoured motor boats and then have the Secretary of State weep in his cups about "the sacrifice made by the brave men and women of our armed forces."

Brave they undoubtedly were, but they were led to the slaughter like lambs. This is simply not good enough.