When the music has to stop 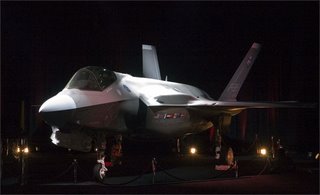 The fate of the Joint Strike Fighter – or F-35 Lightning II as we must learn to call it – has hugely entertained us on this site, with the will they won't they drama of whether the Brits will actually buy it and the parallel saga of the second engine.

Although things have gone somewhat silent and there are still serious funding issues, the UK still seems to be in the game, even though we have yet to hear precisely what has happened to the carrier project.

But there always was going to be a time when the players had to get serious. That time has arrived: the participants in the multi-national project have to commit to the production and support phase.

Leading the way is the Netherlands which on Tuesday became the first of the partner nations to make that commitment. The other F-35 partner nations - the United Kingdom, Italy, Turkey, Canada, Australia, Denmark and Norway - are expected to sign up by the end of December.

Then the music is going to have to stop and the partners are going to have to put up or shut up. For Gordon Brown, that means a serious spending commitment – getting on for £15 billion, including the carriers. I suspect that there is more than a little heart-searching going on in the Treasury. Meanwhile, DID has a good backgrounder on the Dutch decision.