Except for the recriminations 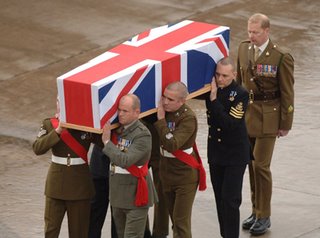 It was inevitable that today's repatriation of the bodies of the personnel killed on Sunday plus the body of Kingsman Jamie Hancock, would be reported widely. Indeed, over 150 websites have recorded the event.

But there are other things going on. While the BBC ran the latest non-development in the "cash for honours" case, according to the British military spokesman in Iraq, every British location and every single base in the south Iraqi city of Basra was attacked last night (Wednesday/Thursday).