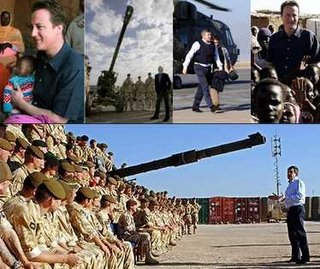 Late last night, Booker and I were discussing the extraordinary situation where the three leading politicians of this nation seemed to have abandoned the "soundbite" in favour of the photo-opportunity as a means of conveying their messages to the voting public.

But not only have they been expending their energies (and our money) on acquiring an ever wider range of pictures for the album, there is – as we noted - a distinct difference in the message the politicians are trying to convey. Of late, the Blair-Brown "team" have concentrated on the bellicose while the Boy Cameron has been after the fluffy, "caring" shots.

However, as the polls seem to be indicating that the "man from Mars" pics were giving Gordon Brown the lead on the hard-edged issues, Booker and I agreed, somewhat cynically we thought, that we would shortly see the Boy setting up some soldier shots for himself.

Prescient or what? This morning we see the news that the Boy has ditched a long-standing appointment to speak to the CBI at their annual conference (seriously upsetting them in the process), instead dashing over to Iraq for a photo-opportunity with some soldiers. 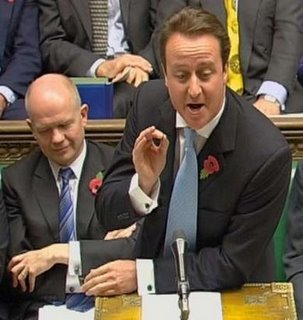 Officially, the Boy is in Iraq on a "fact-finding" tour with William Hague, his shadow foreign secretary. He says he wanted to show his support to the troops and hear their experiences.

But the amount of "fact finding" he can do in the space of a day trip – which includes getting there and back – has to be very limited. In fact, a comment on the Iain Dale blog sets out the likely scenario for such a visit (albeit in a different context - but you get the drift):

...do you think his handlers will allow him to be put anywhere near some real frontline troopies? There'd be some carefully staged photo op of him in shirtsleeves talking at a group of carefully selected, neatly washed and ironed squaddies. Then a couple of shots of him enjoying a "typical meal" with the same squaddies all of whom would be under orders not to speak unless spoken to and to smile politely.

There'd be the obligatory macho shot of him sitting on a tank or field gun. And maybe, if he really felt his martial credibility needed bolstering, one of him in a hilltop op watching a distant explosion through a pair of high powered binoculars. At no time will he meet frontline soldiers nor go within fifty miles of the enemy. And nobody he might meet would be allowed to display their bad manners by raising matters like equipment and supply deficiencies. 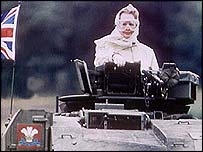 In truth, the fact-finding is a charade. The Boy is there for some happy snaps in front of some hunky squaddies, to square up his portfolio which is becoming dangerously unbalanced. He has overdone it on the "touchy-feely" shots.

There is, of course, plenty of precedent for politicans, from Churchill and before, lining up to have themselves snapped with the troops. Famously, the "Iron Lady" – Margaret Thatcher – got herself photographed actually in a tank. But, while she may have got away with it, I suspect the Boy is just going to look faintly ridiculous - whatever he does.