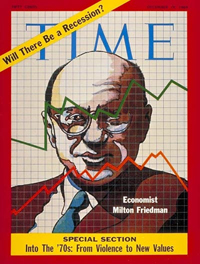 Not long ago we reported the death of Lord Harris of High Cross. Today we have to report the death of another very great man, Milton Friedman, the guru of monetarism and other free-market policies.

Friedman won the Nobel Prize for Economics in 1975 “for his achievements in the fields of consumption analysis, monetary history and theory and for his demonstration of the complexity of stabilization policy”.

Milton Friedman’s achievements as economist and inspiration to such political leaders as Ronald Reagan, Margaret Thatcher and Vaclav Klaus are well known and detailed in many articles, including this one on the Financial Times website (though I do not know how long it will remain available). But what made him so special is the extraordinary clarity with which he wrote.

His 1962 book “Capitalism and Freedom” and the 1980 “Free to Choose”, which he co-authored with his wife Rose, also a talented economist, made his ideas clearly comprehensible to a large number of non-professionals. And, of course, the very fact that his work was done in partnership with his wife makes them both extraordinary for the generation that is now in its late eighties and early nineties.

The world will miss him greatly.