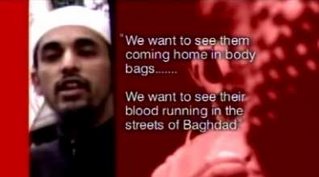 Mizanur Rahman, the 23-year-old British-born Muslim who called for the killing of British troops has been found guilty of stirring up racial hatred at the February protest outside the UK's Danish Embassy.

The Old Bailey jury was unable to reach a verdict on a separate charge of soliciting murder and it is understood that there will be a re-trial.

It is not known whether Rahman is planning to use this in a plea of mitigation when he is sentenced.