I expect his family will be pleased

[This is being cross-posted from One London because I thought it might be of interest to our readers on this blog.] 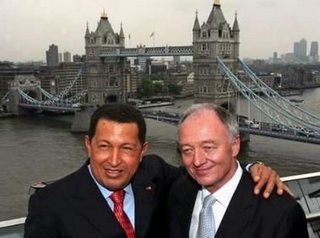 At the press conference this morning Hizonner the Mayor wept crocodile tears at the thought that he might have to go to Venezuela again (or, rather, instead of the aborted trip) and that means he will be away from his children (sob!) and will have to go to an airport and sit on a plane for hours and hours and hours (weep!) and gosh how he hates it all. Well, as Michelle Malkin says, boo-freakin-hoo. He can stay at home and play with his children.

This whole Cuba/Venezuela fiasco is quite mysterious. The idea was that Hizonner would go to Venezuela to see his great pal Hugo Chávez and sign an agreement whereby the Venezuelan president will sell oil cheaply to help the poor of London while Hizonner will supply him with help in various ways by way of consultation, security and so on.

The whole idea was whacky to start with. Suppose the oil does come to London cheaply and is used by buses, how will TfL ensure that only the poor of this city use those buses? Come to think of it, how will they define the poor and will the latter have to carry ID cards to get on the buses that run on cheap petrol?

There is also the slight problem of the EU and the Procurement Directive, which may have something to say on TfL or Hizonner signing such an agreement. They can’t even plead that this helps the local economy or is particularly green in its intentions.

And precisely what would be achieved by this gesture as far as the people of Venezuela are concerned? By and large Chávez doesn’t care, being more interested in his own political influence in countries outside his own. But even he must have realized that he can have no influence in London that would matter in any way. London does not vote for UN Security Council members, for example.

It’s worth remembering that the “poor” of London are like millionaires compared to the poor of Caracas. Venezuela’s one big asset is its oil. How is selling it cheaply likely to help the poor of Caracas or any other Venezuelan city? If Hizonner and his friend Chávez were really interested in the lives of the poor they would not negotiate this nasty little deal.

Venezuelan oil should be sold at market prices with the money used for investment into the economy. If some of that will involve buying British expertise, so be it. But that is the only way that country and its people will ever emerge from poverty.

Something along those lines had clearly occurred to Chávez or, maybe, his opponent Manuel Rosales whose supporters poured out onto the streets of Caracas in tens of thousands, pointed this out.

However it may be, Chávez, who is currently pushing through a law that will allow him to lay his hands on the funds and files of all international NGOs, decided that he did not want to see his great chum Ken after all. Perhaps, he thought that his electoral chances will decrease if he has an old-fashioned leftie campaigning for him.

Ken’s own explanation was that the timetable of Venezuelan election did not allow El Presidente any time to see his great friend from London. Reasonably enough, he was asked at the press conference whether he had not realized before going on this trip that there was an election campaign going on in that country. Apparently, he hadn’t really thought just how busy El Presidente might be, threatening his opponents with gaol if they say the wrong thing and cracking down on charities and NGOs.

The whole trip was enlivened by the Cuban aspect. On his way to Venezuela Hizonner decided to touch down in Havana, being happier in a country ruled by a dictator who does not even pretend to have any elections.

When the inevitable row broke out, Hizonner explained that he was there to learn things from Cubans (perhaps how not to pay any attention to the wishes of the people) and to participate in the International Olympic Committee’s Sport for All Congress in Havana, having been invited to it by Lord Moynihan. This has not been confirmed by the noble lord but we do know that Hizonner spent around thirty minutes at the closing session of the Congress and was not seen at it at any other time.

So what was he doing in Cuba? When it became obvious that he was not going to Venezuela, Hizonner suddenly produced a new reason for being in Cuba where he was not really supposed to be. Apparently, he was there to negotiate a huge Cuban Arts Festival in London next year, there being no telephones, no e-mails and, above all, no other people in the arts who can deal with the matter.

Actually, Hizonner is being very cagey. Various journalists tried to get him to tell them exactly which meetings he had attended, with whom and with what results but he gave away no information. Could he have been preparing to take over from that aged tyrant, Fidel?

What we do know, partially, is how much it all cost.

No, I don’t know either why the Mayor of London should have several reasonably well-paid people on his staff to deal with international affairs. But I note that there was nobody there from the arts section, who might know something about arts festivals.

This reflects the full cost of the tickets less an anticipated refund of £2,500 for the unused element and we were also told that meals included business hospitality.

We have since been told that the actual cost of flights, with the unused part of the plane tickets being refunded, was £11,086, making this part of the expenditure £13,145. Well, that is what we know so far. It is slightly odd that the refund appears to turn out to be considerably higher than predicted.

Then there is the Venezuelan delegation, which consisted of:

Interestingly enough, the very same people had already visited Venezuela, presumably to prepare the ground for their subsequent visit, which was to prepare the ground for Hizonner’s visit, which never took place, between June 26 and July 1 of this year. At the moment we do not know how much was spent on that trip but we do know the expenses on this one:

And what good came of it all? Well a number of people who are already in receipt of very high salaries at the taxpayer’s expense had a spiffing time in Cuba and Venezuela.

It’s your money and mine, folks.