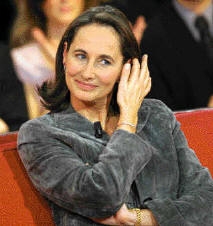 Be they socialist or "right" wing, there is one thing all French politicians have in common – they are French. And being French, they all think the same way, which puts not a Gauloise fag paper between Mme Ségolène Royal and the man she hopes to replace, Jacques l'escroc Chirac.

Thus, according to The Telegraph, she wants Britain to choose between being a "vassal" of the United States, and embracing a French-led drive for European integration 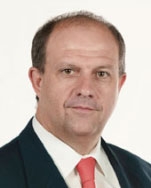 This came hours after her victory on Thursday, from Gilles Savary, a French MEP and her spokesman and foreign affairs adviser. He complains that Britain currently leads an "ultra-Atlanticist" bloc within the EU and while he thinks Great Britain is "absolutely indispensable" to the Union (not), he want the "English" to consider whether the English Channel is wider than the Atlantic.

"We on the continent have the right to deplore the fact that Great Britain appears to consider the Channel is wider," he said. "The question that needs to be asked is – do we want to be vassals of the United States, do we want to be a 51st state?" 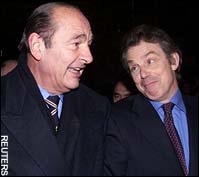 It is precisely that "vision" which drove Chirac to push for the 1998 St Malo agreement to set up the European Rapid Reaction Force, but it was not Blair's.

In his own woolly way, he believed that Britain could embrace European military integration and keep on good terms with the US. As we remarked last year and more recently, he saw Britain as a "bridge" between Europe and the United States.

On offer, therefore, it seems there are three "visions" of Britain in the world – an American vassal, a French vassal, or a bridge between the two. To many though – including this blog – none of the three are acceptable. Time, methinks, for more discussion on the Anglosphere.