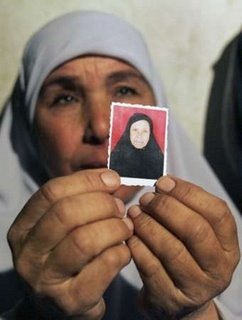 According to The Times and others, a grandmother became the oldest Palestinian suicide bomber yesterday when she blew herself up in Gaza and slightly wounded two Israeli soldiers.

Fatma Omar An-Najar was the first suicide bomber to be claimed by Hamas for nearly two years. Its armed wing said she was aged 57, but her family said she was 68. Israel said that its soldiers had spotted her acting suspiciously and threw a stun grenade, causing her to set off the explosives early.

Just a few questions: How do you negotiate with these people? Equally to the point, how do you define a civilian (i.e., non-combatant) in Gaza? And what is the EU policy on exploding grannies?