A question of sources 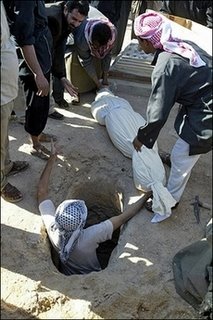 There is some seriously good work being done in the blogsphere on the story of the burning sunnis, with Michelle Malkin doing a superb anchor job.

The issue revolves around the credentials of a source who claimed the incident occurred, claimed by AP to be a police captain but disowned (or about to be) the Iraqi Ministry of the Interior and the US Military.

Therein lies the key to good (and bad journalism) – the reliability or otherwise of our sources. Rarely does a journo actually witness events or express a direct opinion – everything is done through the prism of a network of "sources". And in the AP story, that source seems to be very unreliable indeed, calling into question to veracity of the whole story.

This is our modern dilemma – never so much have we had so much information, in volume terms, much of it coming through the internet. But what the internet also shows us it that multiple outlets often have but a single source. How many times do you look on Google News for instance, to see a story reported in hundreds of newspapers, only to find that all the reports are copy-outs of one agency report?

In any news report, therefore, it is vital that we know who or what the sources are and whether they are reliable. Amongst other things, the job of the news agencies and the journalists who work for the direct media – those which communicate directly with the public – is to ensure that sources are reliable or, where they are partial, to make the nature of that partiality clear.

That is vital when the thrust of any story is reliant on the opinion or uncorroborated evidence of one source. Where the source is coming from can make all the difference to how a story is viewed.

And, while the "burning sunnis" are rightly getting plenty of attention from American bloggers, in their own back yard is an equally insidious form of misrepresentation, as conveyed in a story by our own Daily Telegraph. Written by Toby Harnden, it is headlined: "Britain's special relationship 'just a myth'". But, Mr Harnden, who is the myth-maker?

We will be pointing up a few little inconsistencies in a new post, as soon as we can get it written. And the photograph … one definitely in the style of Qanagate – see here for how dishonestly it has been used.