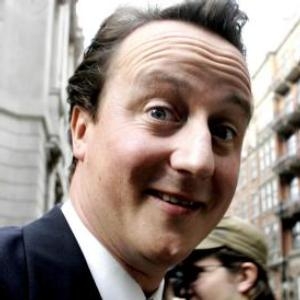 James Harding of The Times is not impressed with the Boy. He writes:

David Cameron has chosen to be photographed among men in uniform, rather than men in suits. And, as photo-opportunities go, Basra may make a lot more sense than the CBI conference. But his decision to drop out of the annual summit to go to Iraq is an unnecessary and, for a politician sensitive to symbolism, unusual blunder. The mistake will only add to the growing doubts about the Tory leader in British boardrooms, stoking the perception that he has an unreliable and ambivalent attitude to business.

Meanwhile, the latest poll, from Communicate Research in The Independent gives Labour 36 points (up 4), the Conservatives at 34 (down 4) and the Lib-Dems at 17 (up 3). The "others" stand at 13 (down three). This is after the Darfur photo shoot, which suggests that the stunt didn't work.

Neither, incidentally, does the Basra stunt seem to have worked. Up to press, no photographs of the Boy communing with hunky squaddies seem to have been published. And Michael Harrison, in The Independent (not the Tories' best friend), writes: "It is hard to know who to feel more sorry for - the CBI delegates denied a chance to hear David Cameron speak or the troops in Iraq who had to listen to him instead."