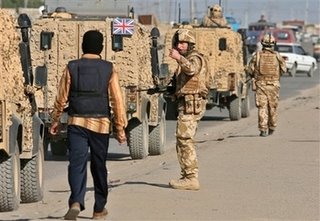 There are many reports on the violence in southern Iraq yesterday and, although confusion still reigns, the situation is beginning to come clearer.

As we left it, British ground forces and US military helicopters had been fighting with gunmen on Friday in the area of southern Iraq where four American security contractors and their Austrian co-worker had been taken hostage after their convoy had been hijacked.

The fighting turned out to be in the Basra suburb of Zubair, and there were reports that two of the gunmen had been killed in the fighting. Furthermore, according to The Times and others (mostly reporting from over 300 miles away in Baghdad), there have been several more incidents.

In one, a British security guard was shot dead and another was wounded in the same area where the Americans and Austrian were kidnapped (apparently in a shoot-out with Iraqi border police).

The Times says the upsurge of violence "began on Thursday" with the attack on the convoy, but we know different. There has been pretty much a continued escalation of violence ever since last Sunday's boat attack, but the increase has in fact been sustained ever since the end of last month. 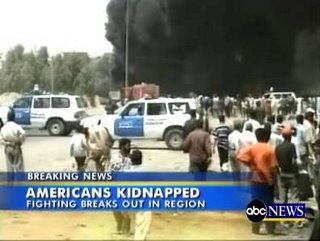 As to the convoy incident, we now know that the convoy consisted of 49 vehicles, which was a substantial target to take on. The insurgents hijacked 20 of them and grabbed 14 foreigners, according to a US embassy spokesman, leaving some vehicles burning.

Nine of the hostages, all of them Asian, were released by the kidnappers and two of the remaining five hostages have since been freed by the police. One, apparently an American, has been found dead.

Meanwhile, Blair has been on interview on Al-Jazeera's new English-language channel and, challenged that the Western intervention in Iraq had "so far been pretty much of a disaster", we are told that he "gave a brief agreement before swiftly moving on."

He said: "It has, but you see what I say to people is why is it difficult in Iraq? It is not difficult because of some accident in planning, it is difficult because there is a deliberate strategy, al-Qaeda with Sunni insurgents on one hand, Iranian-backed elements with Shia militias on the other, to create a situation in which the will of the majority for peace is displaced by the will of the minority for war."

After his apparent admission that the intervention had been a disaster, he insisted: "We are not walking away from Iraq. We will stay for as long as the Government needs us to stay." He continued:

And the reason for that is that what is happening in Iraq, as in Afghanistan, as elsewhere in parts of the Middle East, is a struggle between the decent majority of people, who want to live in peace together, and those who have an extreme and perverted and warped view of Islam, who want to create war. In those circumstances, our task has got to be to stand up for the moderates and the democrats against the extremists and the sectarians. They are testing our will at the moment, and our will has not to be found wanting. 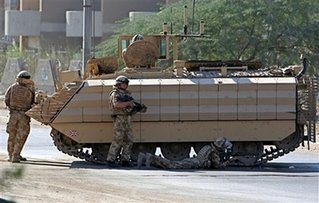 That, we would aver, remains to be seen. It is to our mind highly significant that, although British troops were out in force yesterday, they had to rely on support from US helicopters – although it does seem as if the newly up-armoured FV432s have been given an airing (see above).

However, in its failure properly to equip its own Army, the British government is displaying a lack of political will. Words are cheap but, so far, Mr Blair has not backed them up with action.