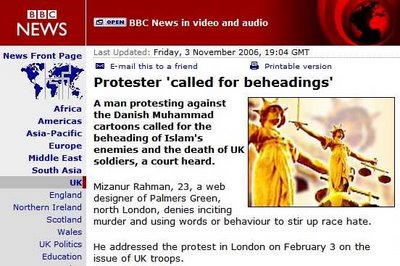 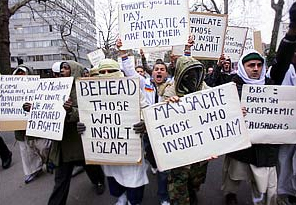 Who could ever forget that extraordinary demonstration in London by fanatical Islamists and their inflammatory placards?

Well, it seems the BBC is very anxious that you should. The above is its website recording that, at last, one Mizanur Rahman, 23, a web designer of Palmers Green, north London, has been brought to court, denying that he has been inciting murder and using words or behaviour to stir up race hate. 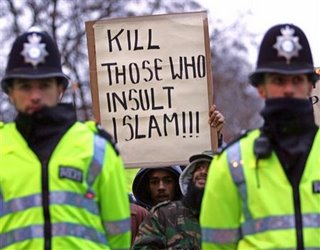 We are told he addressed the protest in London on February 3 on the issue of UK troops. Prosecutors said Mr Rahman had told the crowd: "We want to see their blood running in the streets of Baghdad." David Perry QC said Mr Rahman had carried placards saying "behead those who insult Islam" and "annihilate those who insult Islam". He said: "Annihilate and behead are ordinary English words with the ordinary English meaning of kill."

But, although the demonstrations were extensively photographed and filmed, surprisingly, the BBC seems unable to find an example and resorts to a graphic that represents "justice". Well, just to remind the BBC what went on, we have put up some examples.